Violence in Belgrade, clashes with the police, bloody heads ended in the world media

World media report on the violence on the streets of Belgrade, clashes with the police and bloody conflicts 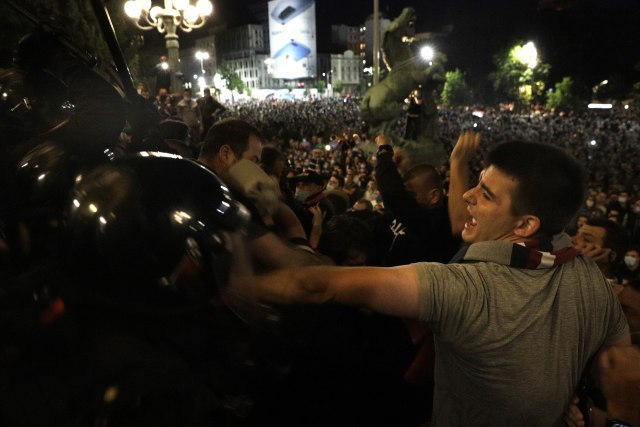 World agencies reported late last night that protesters and opposition supporters clashed with police and tried to break into the Serbian Parliament building in Belgrade, after announcing the return of restrictive measures, including a curfew for the weekend, to curb the spread of the coronavirus.

According to the agency, some protesters briefly managed to break into the assembly building, but the police suppressed them, and they retaliated by lighting torches and throwing stones, bottles and eggs at the police.

The AP states that the police fired tear gas at the protesters in front of the parliament building on several occasions, while some protesters shouted: "Resign, resign".

Several clashes broke out between some of the most extreme protesters, who appear to belong to far-right groups, according to the AP, and police officers who used batons.

Police also reportedly clashed with protesters in front of the RTS building, which the opposition accuses of biased reporting in favor of the authorities.

Earlier, President Aleksandar Vucic described the situation with the coronavirus epidemic in Belgrade as "alarming" and "critical", because the hospitals in the city are close to full capacities, after the authorities reported the highest daily number of coronavirus deaths earlier in the day.

According to the AP, many accused the President of Serbia of lifting the previous restrictive measures only because of the elections, which he denied.

The agency also reported that the Prime Minister of Serbia, Ana Brnabic, condemned the protests, stating that the police would protect order and peace, and accused the opposition politicians of being behind the incursion into the parliament.

Reuters states that Serbia, with a population of seven million, reported 16.168 cases of coronavirus, and 330 deaths, and only on Tuesday, 299 new cases and 13 deaths were recorded.

Epidemiologists and doctors have warned that hospitals are full and medical workers are tired, according to the British agency.

Reuters points out that Serbia introduced a state of emergency at the beginning of March in order to suppress the spread of the coronavirus, and at the end of May, it was among the first countries to open and schedule elections for June 21.

Opponents blame the government for the increase in the number of coronavirus cases and claim that citizens should not pay the price through yet another lockdown, Reuters reports.