Deutsche Welle: Thaci hoped that Washington would save him?

"Frankfurter Allgemeine Zeitung" publishes excerpts from the interview with Hashim Thaci, the last one prior to the indictment for the war crimes in The Hague. 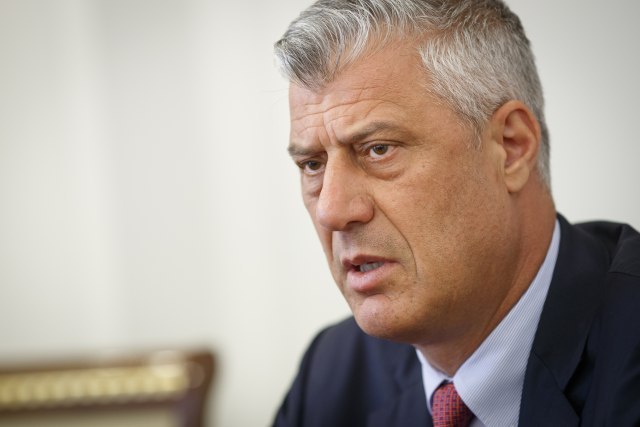 Some media saw it as a great opportunity for Kosovo.

Michael Martens, a journalist with the respected Frankfurter Allgemeine Zeitung, talked last week with Kosovo President Hashim Thaci - about dialogue with Serbia, especially about the announced meeting with Serbian counterpart Aleksandar Vucic in Washington, with the mediation of Richard Grenell. The interview was supposed to be published today.

On Wednesday, the conversation took on a whole new dimension, after it was announced that Hashim Thaci, together with Kadri Veseli and others, is on the indictment of the Special Prosecutor's Office in The Hague, charging him with serious war crimes.

"Thaci has been critical of the European Union for months, and at the same time he does not miss the opportunity to praise the American leadership led by Donald Trump and his special envoy for the Balkans, Richard Grenell," Martens now writes.

"Western diplomats in Pristina have long suspected that this could mean that Thaci hopes for American protection - by posing as a necessary partner for Washington, he allegedly wanted to gain American political support in order to avoid a war crimes indictment. If it really was his calculation, now it's destroyed", the text adds.

That is why, in a conversation last week, Martens asked Thaci about speculations that he was arranging a mutual amnesty for war crimes with Vucic.

"Never. We have never and will not discuss such a topic," Thaci replied, adding that Serbia had committed "genocide" in Kosovo and that there could be no amnesty for such crimes.

From today's perspective, the text reads, it is striking that Thaci, in response to the question about amnesty, "immediately diverted attention from his possible role and instead accused the international community of ignoring Serbian crimes in Kosovo in the 1990s."

It is now known that Thaci will not go to Washington, and the current Kosovo Prime Minister Avdullah Hoti also canceled his participation. In an interview with the Frankfurt newspaper, Thaci again criticized the European Union and praised the role of the White House:

"Americans are proving once again that they can act faster, more accurately and more efficiently than Europeans. That is why the American leadership is necessary for Serbia to overcome its conflicts in Kosovo. "If there are lights for our countries at the end of the tunnel, then it shines from Washington," Thaci said before it was announced that he was accused of war crimes.

Neue Zürcher Zeitung reminds that "perhaps the most important advocate of legal confrontation" with these events is the Swiss liberal politician Dick Marty, formerly a member of the Swiss Canton Council and a member of the Parliamentary Assembly of the Council of Europe.

"He published a report on the alleged crimes of KLA members in 2010. It mentions, among other things, ethnic persecution, executions and trafficking in the organs of prisoners of war. Marty believes that Hashim Thaci is most responsible for that," the Swiss newspaper writes.

Neue Zürcher Zeitung writes that Thaci was always counted among the opponents of the Special Court established five years ago in order to shed light on the crimes of the KLA, and that the Court was located in the Netherlands precisely to protect itself from pressure.

"The indictment against Thaci comes in politically turbulent times. In March, the government of Albin Kurti fell after less than two months, which led the country into a severe political crisis in the middle of a pandemic. Thaci played an important role in overthrowing Kurti from the background," the Swiss paper wrote.

An analysis by the Swiss Radio and Television (SRF) says that the indictment against Thaci puts Kosovo in an extremely difficult position, but "there may be a chance for a historic turn". "If the special court for Kosovo in The Hague finally convicts Thaci, it would pave the way for a new beginning. For a new president (or female president), who does not overthrow democratically elected governments with tricks", SRF states.

"Then perhaps the attitude could prevail in Kosovo that a man with a dubious image like Thaci's - whatever his merits - is not suitable to be the head of a European country that calls itself a democracy," the Swiss public service concludes.