"We will not be arrogant while constituting the Government"

President of Serbia and SNS leader, Aleksandar Vucic, stated that during the formation of the SNS government, his party will show lack of arrogance 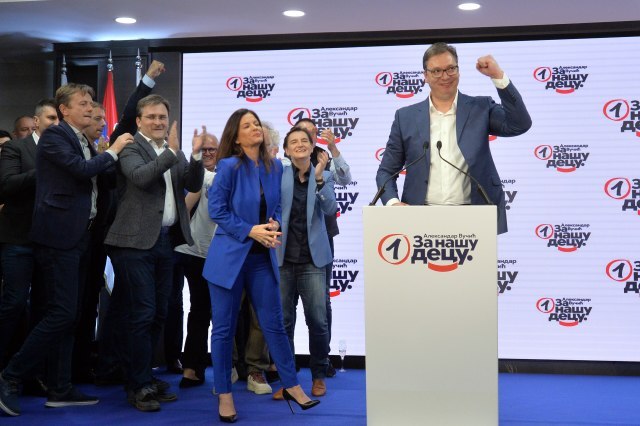 Addressing the public and SNS supporters last night, after it became clear that the list headed by him would have an absolute majority in the new parliament, he said that SNS would talk to the representatives of all parties, even those who did not pass the census.

"We will take people from other lists as well, because we will try to form a government that will have to make crucial decisions in the coming period and that will have an even broader consensus than such broad support we received," Vucic said at a press conference last night at SNS headquarters.

He pointed out that Serbia will have to work faster, stronger and stronger on the European path and implement additional reforms.

Vucic pointed out that along with the European path that Serbia strives for, it must continue and keep friends who, he says, were there at the time of the coronavirus and when the sovereignty of Kosovo and Metohija was endangered.

The leader of the SNS jokingly told his party colleagues not to try to "form" coalitions in the next 10 days while he is on the road, and said that he would form a government at the local level based on the results of other parties.

"I want to talk to everyone, to make compromises, I do not want to show arrogance, haughtiness and superciliousness anywhere," Vucic said. He pointed out that the support that the SNS received from the citizens is "key" in the "crucial" moments for the country, but also a reward for the effort, hard work and "excellent" results.

He pointed out that such a strong support represents an additional burden for the SNS, because no one has ever had such support for such a long time.

"Yet, we hadn't waged any war. No Serbian citizen had suffered because of our policy, and I hope and I'm sure no one won't. In all this, we have made Serbia have the fastest and most significant economic growth in modern history. That's what people want”, he underlined.

Vucic reported that according to their exit polls, 62 percent of women voted for the list around the SNS, and 38 percent of men, which, he says, means that 75 percent of women, out of those who went to the polls, chose SNS.

He is proud, he says, of the fact that the list will have a huge number of young people in the assembly. "One of our political opponents said that we will not have enough deputies for the assembly, because we put officials on the list... Now, it seems that everyone we put on the list will be deputy," Vucic said.

He congratulated all other parties on a correct and fair campaign, and assessed that this was the calmest and cleanest election campaign so far.

He pointed out that, at this moment, three or four lists, without minority parties, will enter the parliament. He stated that, apart from the SNS, those are: Socialist Party of Serbia (SPS), Aleksandar Sapic - Serbian Patriotic Alliance (SPAS), while Movement for the Restoration of the Kingdom of Serbia (POKS) is "on the verge" of crossing threshold. "I cannot rule out the possibility that Sasa Radulovic's "Sovereignists" and Metla will also enter the parliament, because they have about two and a half percent," Vucic concluded.