Serbian President and SNS leader, Aleksandar Vucic, expressed hope that a large number of Serbian citizens will exercise their right to vote 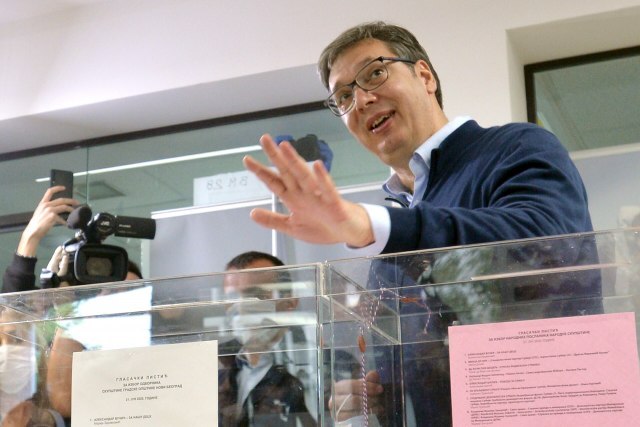 He announced tonight, if his list gains trust, the presentation of the program and plan for the next four years.

"I am very satisfied that there were no serious irregularities until 12 o'clock today, that the elections are taking place in a democratic atmosphere, that there are fewer incidents than ever in the multi-party democracy in Serbia," Vucic told reporters.

"I see that there are queues all over Serbia and I expect a good response," he said after casting his vote in New Belgrade.

In a statement to the press, he said that he would like to gain 1.7 or 1.8 million votes, which would be a source of pride and great success in the conditions when the campaign is being conducted through the tycoon media.

Vucic pointed out that it is equally important for him to see how much and in what way people evaluate the work of the government in the previous four years and the plans for the next four years.

He says that he saw that they competed in the region and elsewhere in the campaign against him, the party he leads, and Serbia.

"This not only gives us even more energy and strength to build friendships with them, but also to make the country even more successful in parameters that are easily measurable. We have exceed almost everything, and those we haven't catch up with, we will do so, soon. They better look at their own and our growth", he stressed.

He pointed out that he hopes for success and a good result.

"Depending on the results, I will have the right tonight to talk about plans in the future," he said.

He pointed out that he expects difficult weeks on the issue of Kosovo and Metohija, but that he thinks that regardless of the fact that some did everything in the previous three days and months, scaring people before the elections, the people's will cannot be stopped.

"In Kosovo, 22 percent of the population came out, and in our country, we reached that number by noon", he emphasized.