Vucic: I feel ashamed to talk about the recognition of Kosovo on the eve of Vidovdan

President of Serbia, Aleksandar Vucic, denied the allegations that Serbia will recognize the independence of Kosovo on the eve of Vidovdan 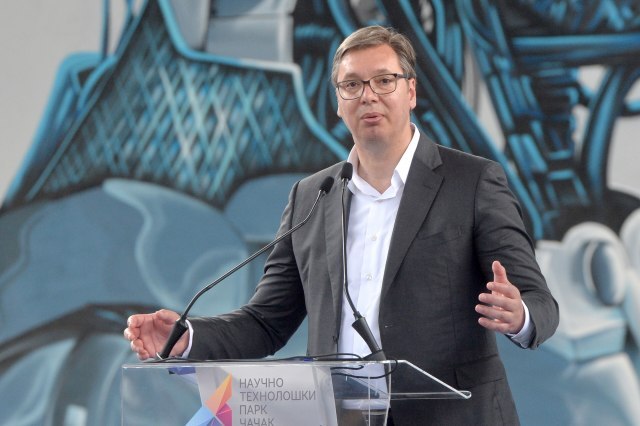 "I am ashamed to even answer to the question whether Serbia will recognize Kosovo on the eve of Vidovdan. I am ashamed, because it says more about them. It will never be on our agenda. It speaks about what others have done," he said.

He pointed out that we are facing a difficult period, which will commence with the arrival of Miroslav Lajcak.

"I talked to Putin yesterday, we had a long discussion. The day after the election, Lajcak is coming to Belgrade, the day after that I'm going to Moscow. Two days after that, we have to agree which delegation is going to Washington. A few days after, I think that there will be some more important meetings that we cannot talk about right now, because we were told so", he said, adding that we would "try to successfully protect our national interests".

Vucic stated that we should wait to see if the Albanians will comply with Grenell's request to stop Kosovo's run for the membership in international organizations.

"Don't forget that Thaci never wanted to accept that. For four years I offered it, for four years he insisted because there was always a terrible campaign against us. For four years they did not accept it, and now we are suddenly informed that they agree to it. We will see," he said.

As he stated, there is a big conflict between United States and Germany, but it is important that Serbia pursues a smarter policy than it did before in relation to the great powers.

"No matter how it ends, it is important that we remain unharmed in the fight of elephants. We will not fight with Germany and America," Vucic said, adding that Serbia wants to talk and not run away from it.

He was also asked whether the announced possibility for Pristina to give up the request for recognition in international organizations could mean that there is no solution without compromise.

"A big game is being played here between the big players in the international community, for which both we and the Albanians are too small. On the other hand, the Albanians are leading their internal games," he concluded.