Vucic on Kosovo and Metohija: Serious competition between Washington DC and Brussels

The President of Serbia, Aleksandar Vucic, said in "Prva tema" that he had not yet heard what the solution to the "Kosovo issue" would be 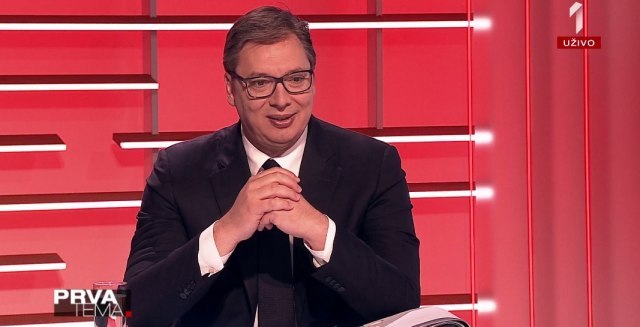 "I hadn't received any proposal yet," he said.

When asked if we expect an ultimatum and if we have the strength to respond to the ultimatum, he answers:

He says that the new platform of Kosovo officials for solving the problem of Kosovo is just a "list of good wishes of irresponsible politicians".

He also states that Lajcak will come to Serbia after the elections, and that he or Prime Minister Brnabic will travel to Washington by the 26th of June.

"I guess, as I am not so stupid, what they would like. The agendas of Washington and Brussels are different, but they would like to reach a similar solution. There is a big fight between them who will lead the negotiations," he states.

He added that we must also understand what situation we are in and that 93 percent of Albanians are there.

"Everyone's goal is for Serbia not to get anything in Kosovo and Metohija, so it is impossible to meet halfway. In our platform, Kosovo is part of Serbia, but in theirs, Kosovo is an independent state," he said.

He announced tonight that he will have a bilateral meeting with the President of the Russian Federation, Vladimir Putin, on June 23, and that he will participate in the Parade in Moscow on June 24.

"I will have a bilateral meeting with Putin on June 23, and I will attend the Victory Parade on June 24, which is a big honor," Vucic pointed out.

"I have arranged tête-à-tête with him", Vucic added.

He will talk about burning topics in the field of economics and politics. What are the challenges facing Serbia, who will be the first to invite Belgrade and Pristina to the negotiating table - Grenel or Lajcak, what message is Lavrov bringing from Moscow? Who is disturbing peace and stability in the region? What would be a victory, and what would be a defeat for the Progressives in the elections on June 21? What kind of turnout does he hope for, what promises does he make in front of the voters? What post-election coalitions are possible?

These are just some of the questions that the president will answer tonight.