Serbia will be exposed to strong pressure

President Vucic said that he won't deal with relations within the Albanian community, it is important for us to get guarantees for Serbs in Kosovo and Metohija. 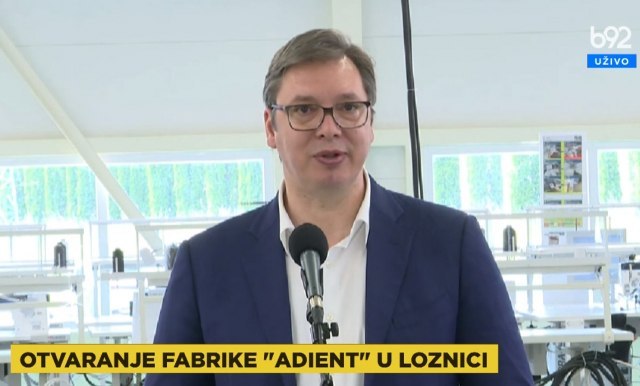 "We are open for talks. Thaci did all this with the help of the United States and will always ask to talk in their presence. Serbia will always talk, but all those measures that destroyed the possibility of free access to goods and capital must be removed. When that has been done, we will be ready to talk", Vucic pointed out.

"I am not sure whether there will be different political aspirations, often pressures, I hear 100 times that we stop the derecognition campaign - we will do that when you stop the campaign of access to international organizations."

He said that he offered this from year to year, in order to protect the people in Kosovo and Metohija.

"It's easy for us in Loznica or Belgrade, we don't live in Gorazdevac… We don't know how Albanians will treat them."

I do not know how Pristina aspires to be on the European path, yet, on the other hand, it will not talk to European representatives, he pointed out.

"You have to keep in mind that neither Germany nor France will change their position on the issue of Kosovo. The question is what are we going to do. We have to bear the brunt that we betrayed Kosovo, and we returned Kosovo to the table with a smart policy, but at the same time keeping the peace, bringing investors…"

"I don't think it will be easy to deal with the Kosovo issue. There are those who say it will be easy, let them think again. He pointed out that he expects great pressures regarding Kosovo and Metohija, and that is why it is important that we get a strong government after the elections.

"It won't be easy for Serbia," Vucic added, and reiterated that Serbia's voice will have be important in that process.
"We have no objections to the talks we had in the EU, as well as in the talks with Grenell. I always tried to get as much as possible in a peaceful way. If they stop with the requests for admission to Interpol and other organizations, we will stop with derecognition campaign", Vucic said.

President Aleksandar Vucic stated today that Russia is a friendly country to Serbia and that the appointment of Yevgeny Primakov to the position of director of the "Russian Cooperation" Agency will not affect that cooperation.

"Russia is a friendly country to us, that's how it was and it will be such in the future. And none of the irresponsible politicians in Serbia can change that, nor anyone else," Vucic said when asked how he commented on Primakov's appointment, due to the alleged connection with the representatives of Serbian opposition. He said that Russia is much bigger than Serbia, both in terms of population and territory, and that it can appoint whoever it wants.

"They take care of their interests and we have nothing against anything or anyone, Vucic said, adding that it would be "crazy" for Serbia to influence Moscow's decisions. The media in Serbia state that in March last year, in the midst of anti government demonstrations in Belgrade, Primakov offered Vucic to form a technical government with the leaders of the "Alliance for Serbia".