Vucic: Orbán said that the EU needs Serbia, and not the other way round VIDEO / PHOTO

The Prime Minister of Hungary, Viktor Orbán, is visiting Serbia and met with the President of Serbia, Aleksandar Vucic 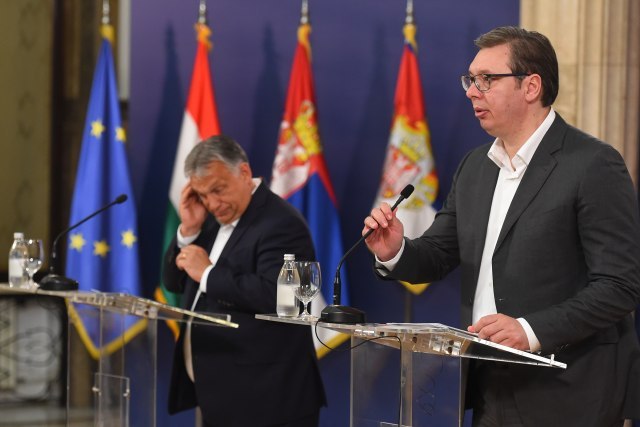 Vucic said that the relations between the two countries are the best in history.

"I am extremely happy that Serbs and Hungarians have highly good relations, closer than ever. Our economic relations have never been more developed," Vucic said.

He added that he asked Orbán for additional support from Hungary on Serbia's European path.

"I asked for even stronger support from Hungary. I want the citizens of Serbia to know that when many think about what to say, when it comes to the rights of national minorities, they are always there to say good words for our country and we are grateful for that", Vucic said and added that with that help, Serbia will be able to secure a safe future on the European path.

According to him, Serbs and Hungarians live together and there are not even "hidden problems".

"It is important for us to express the gratitude we received during the pandemic, when help did not arrive from many sides," Vucic said.

He mentioned that Hungary also helped us get medical aid.

"I informed Prime Minister Orbán about everything that is happening in the region, the situation in Kosovo and Metohija, the talks we expect, and asked for understanding of Hungary," Vucic said, adding that although Hungary recognized Kosovo's independence, they understood Serbia.

"No one understands Serbia better than Hungary," he said.

Vucic said that he was not interested in whether someone would criticize or praise him, but he asked the citizens of Serbia whether we had experienced something bad from Hungary and Prime Minister Orbán.

"When was Hungary against us in European and world forums? Do you know a country that spoke louder to protect the rights of Serbs, even in Kosovo and Metohija and the region?" Vucic asked, adding that he did not know what else to do, when the Hungarians, as he said, have done everything in their power.

He said that, while he is the President of Serbia, Hungary's word will be respected.

"I know how much effort he put into finally correcting the historical relations between Serbs and Hungarians, both of them, he more than I. That is why today we have not only peace, but we have the closest relations between our peoples," he said.

Vucic said that he would not say anything bad against Orbán, adding: "Beat me in the elections, find those who will flatter world magazines."

"Viktor was the only one who said at the video conference that EU needs Serbia more than Serbia needs the EU. Merkel and Macron and everyone else listened to that", Vucic said.

“Serbia is much more important to the EU than the EU is to Serbia. Perhaps that is not visible from the Baltic Sea or the Atlantic Ocean but it is very visible from Budapest,” Orban concluded.

The Prime Minister of Hungary, Viktor Orbán, said that it was important to "encourage each other", because, as he mentioned, both countries won the first battle with the coronavirus.

"Now the second battle begins, the restart of the economy, and we will continue to discuss that topic today," Orbán said.

He stated that he would influence the European Union to approve the opening of the remaining chapters for Serbia's negotiations on EU membership.

Orbán said that Hungary was in constant contact with neighboring countries, and that Hungary could conclude that it had many friends.

"Hungary undoubtedly created a special legal system that gave powers to the Prime Minister and the Government, and thanks to that, the epidemic was acted upon immediately," Orbán said.

He estimated that everyone will have to apologize for the attack, because Hungary managed the crisis due to the coronavirus in democratic conditions.

"It will be proven that it was unfounded that they accused us, and that is why we will be very happy to receive their congratulations for our success," Orbán said.

Speaking about helping Serbia, Orbán said that Hungary must recognize how important Serbia is and say openly that Serbia is a respectable country. “Serbia has regained its reputation in the EU, its word carries weight again and without it the Balkans cannot be stable,” Orbán concluded.

According to him, Serbia is more important to the European Union now than before, and Hungary can contribute to others seeing Serbia's position.

He explained that all EU enlargements have shown themselves well, and that does not distract the strength of Western Europe, and cited the example of Croatia and Slovenia.

"This whole region can be stabilized only on the basis of good neighborly relations," he said, adding that Serbia needs to be granted the same rights as Slovenia and Croatia.

He concluded that Serbia can count on Hungary's support when voting on its membership in the EU is concerned.

The meeting was held in the Presidency building on Andricev venac. Orbán was welcomed at the Belgrade "Nikola Tesla" airport by the Minister for European Integration, Jadranka Joksimovic.

President Vucic posted a photo of the meeting with Orbán on his Instagram profile, with the description: "Welcome, dear friend".