"Nothing will be achieved by violence in Serbian politics" VIDEO

Serbian President urged the election campaign pass without violence, with due respect shown to the participants in the elections of all political affiliations 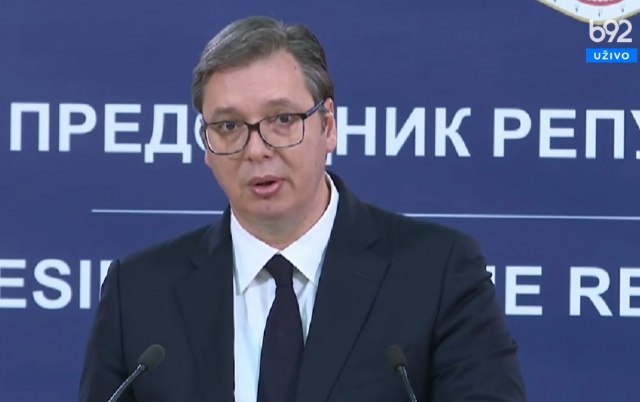 "It is inadmissible to expose our citizens to a health risk. A gathering of 5.790 SNS supporters and about 64 supporters of the "Dveri" movement is being held about a hundred meters from here," he said, emphasizing that he did not state that in order to brag.

He said that we do not need counting, but unity.

"We know which party has the majority in Serbia, but it should be measured in the elections. Not now, when we are not done with the epidemic," he said and called on the citizens to refrain from gathering until the end of May.

He also expressed satisfaction because MP Miladin Sevarlic ended the strike, but also said that it would be difficult to convince Martinovic to do that.

He also called for an end to threats against journalists.

"The person with the initials D. G. from Novi Sad was arrested, who sent threats to the journalist of the weekly 'Vreme', Jovana Gligorijevic," he said.

He once again called on all actors in political life to go to the upcoming elections.

"I wish all of them a fair, democratic campaign. I just ask them not to take part in any violence, because regardless of party affiliation, they will be punished. The competent authorities will react effectively and everyone will be punished," he said.

Vucic did not want to comment on the decisions of the opposition leaders to go to the polls.

"I will not use this as a party stand, I criticized my own party tonight instead. I called for conversation so many times, they refused. I invited them to come for a discussion on Monday, again they did not want to," he said, adding that he will never give in to blackmail if he never saw the opposition that "would like the elections to be held either never or a month after that".

He made it clear that he was not interested in the significance of the idea of a boycott.

"Please, don't make me tell you what a failure it will be. I'm just interested in no violence," he was brief.

Violence will not achieve anything in Serbian politics, Vucic emphasized and added that he would never put up with blackmail and threats.

"As for the hunger strike of one of the opposition MPs (Obradovic), I called for talks countless times and they said that I could not be talked to and that it was not necessary. They repeated it dozens of times, I invited them to come on Monday to the talks when there were other representatives of the opposition parties, and I did that publicly at the press conference", Vucic said.

"I never accepted that, and when they railled close to the Presidency, I was not afraid, I am not interested in that. Violence in Serbian politics will not achieve anything, those times have passed," Vucic said.

As he said, the president strongly condemned the violence in front of the assembly and the brutal attack on Marijan Risticevic.

Vucic expressed hope that no one would use violence and said that the state would react.

He also asked people not to attack journalists no matter what they think about their work.

Vucic also announced that D.G. (1979) from Novi Sad, got arrested for threatening the journalist of "Vreme" weekly, Jovana Gligorijevic, and the prosecution is underway.

"Our job is to ensure that the state of Serbia functions without violence. I am very scared and worried, and this has nothing to do with the SNS and SzS (Alliance for Serbia), I am scared as I see that ultra-right and fascist movements with crazy ideas are tremendously strengthening. I hope that our society will have the strength to seriously and responsibly oppose the anti-civilization ideas from the 15th, 16th and 17th centuries, from the time of the Inquisition, and that we as a society will oppose each other in a peaceful and civilized way," Vucic concluded.