Obradovic spent the night in the MP's office, Bozic and Martinovic outside PHOTO

The leader of Dveri, Bosko Obradovic, slept in the Assembly of Serbia, while SNS deputies Aleksandar Martinovic and Sandra Bozic were in front of the Parliament 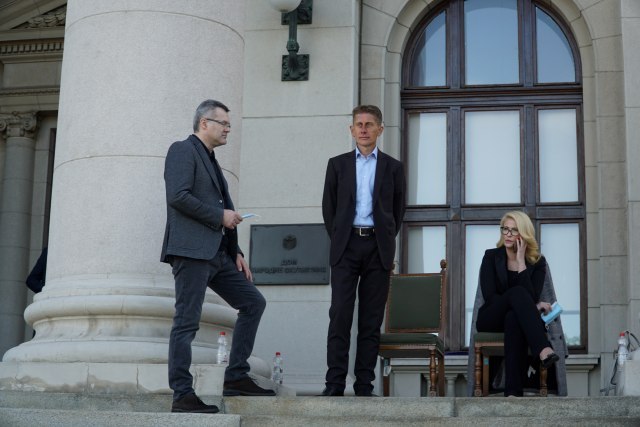 Martinovic and Bozic said that they were reacting to the fascism of the leader of Dveri, Bosko Obradovic, when he physically attacked MP Marjan Risticevic, with a request that the prosecution react to Obradovic's outbursts. Risticevic was filmed with torn clothes after the incident in front of the Assembly, when Obradovic blocked the entrance with a group of sympathizers.

Obradovic spent the night in the MP's office, and just before seven o'clock he went out in front of the parliament, staying on the steps again. Photographs taken during the night appeared, in which he takes the bags, which the media say contained food. The leader of Dveri allegedly received blankets and pillows.

Unlike him, the SNS MPs spent the night in front of the Parliament. Martinovic and Bozic were on the stairs all the time, and most of the night in front was the independent MP Miladin Sevarlic, Tanjug reports, who occasionally entered the building for a while, but returned to the stairs.

Some SNS deputies also spent the night outside with Martinovic and Bozic.

Sevarlic first decided to go on strike, and then Obradovic joined him, as a sign of support, as he first said, because of the alleged statement of the President of Serbia, a year ago, that he would recognize the independence of Kosovo.

Obradovic was "visited" last night in front of the Assembly by the president of the Party of Freedom and Justice, Dragan Djilas, and the Dveri leader later gave a statement to the press and announced a new motive for the protest, i.e. a request to postpone the elections for six months, and in the meantime form a technical government.