President of Dveri Bosko Obradovic, several MPs and supporters of the party "blocked" the staircase at the entrance to the House of the Serbian Parliament today 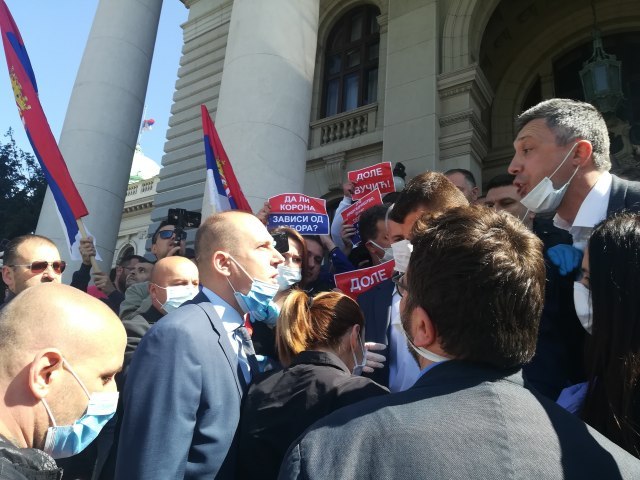 At one point, Obradovic and the Minister of Health, Zlatibor Loncar, who was coming to the parliamentary session, were pushed.

Obradovic and Dveri supporters hold banners "Down with the government", "Does coronavirus depend on the elections", "We can't celebrate St. George's Day, but the elections can be carried out", they carry Serbian flags and party symbols, and shout that the President of Serbia "betrayed Kosovo".

At one point, there was almost a fight, because some MPs wanted to enter the Assembly building, where a new session should start.

The Minister of Health, Zlatibor Loncar, came to the Assembly several minutes before 10 am, and at one point, the leader of Dveri provoked him, facing the Minister with a whistle, who tried to keep him at a distance.

Security stood between the two of them, in order to prevent a major incident, and then they "escorted" Minister Loncar to the parliament, to the main entrance, but from the side, not the central side.

Before Loncar, the leader of the Radicals, Vojislav Seselj, arrived in the parliament, to whom the gathered also shouted.