MP from "Dveri" Bosko Obradovic blew a whistle in the assembly hall, while on its agenda was the proposal to lift the state of emergency 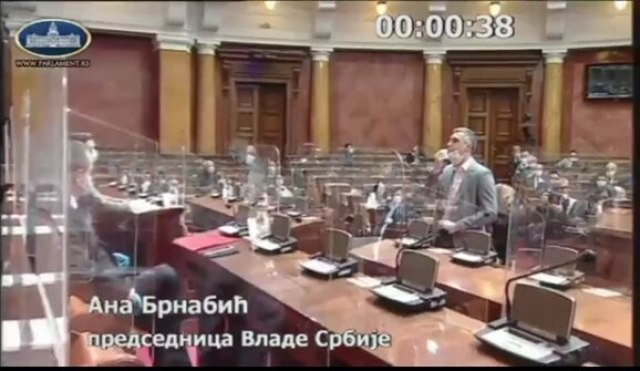 President of the Dveri movement, Bosko Obradovic, today made an incident within the Serbian Parliament when he entered the boardroom at the beginning of the session and started blowing his whistle next to the booth.

Assembly Speaker Maja Gojkovic issued two reprimands to Obradovic, after which she withdrew his word and excluded him from the session. Gojkovic then set a 15-minute break to get Obradovic out by the security.

He did not want to leave the room, continued to whistle and shout "down with the government" and "down with Vucic", and all the time he was standing next to Serbian Foreign Minister Ivica Dacic.

The MPs in the hall are mostly waiting for the outcome, and at one point, security came to Obradovic and called for him to leave the hall, to which the leader Dveri "asked that no one approach him less than two meters away".

According to media reports, Obradovic was pulled from the hall after pushing with security.

At 10.40, the session resumed, with the address of Prime Minister Ana Brnabic.