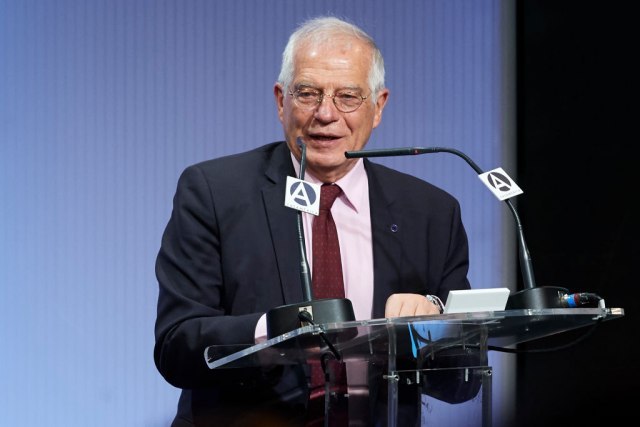 He said that he is looking forward to a swift resumption of the dialogue to help achieve a comprehensive normalization of relations, stressing that he is ready to engage with all political actors in Pristina.

In his written response to a question from the far-right National Front MP, Dominique Bilde, on the possibility of normalizing relations in a situation where "suspected or accused of war crimes" are at the forefront, Borrell reiterated that he is ready for the role of EU mediator in the dialogue, but also to continue engagement with all political actors in Pristina.

"There is no alternative to the rapid resumption of normalization talks between Belgrade and Pristina. Serbia and Kosovo must create the conditions necessary to continue the dialogue, for the benefit of all", Borrell said.

to help achieve a comprehensive normalization of relations.

French far-right National Alliance MP Dominique Bilde says in his question to Borrell that Kosovo Prime Minister Ramush Haradinaj has resigned after being invited by the Kosovo Special Court to The Hague, that Kosovo President Hashim Thaci was the subject of an investigation into allegations in 2010 the Council of Europe Report prepared by Dick Marty, as well as that Rustem Mustafa, convicted of war crimes, was appointed Presidential Advisor in June 2019 and was awarded the medal for his "contribution to the fight for freedom and independence".

In his response, the EU foreign minister recalled that he welcomed the decision of the Pristina government to suspend tariffs on goods from Serbia and Bosnia-Herzegovina, as a step which had a positive effect on restoring regional trade and ensuring the free flow of goods to tackle the coronavirus pandemic.

Borrell adds that the appointment of Miroslav Lajcak as Special Representative for the Belgrade-Pristina dialogue and other regional issues is "an additional signal of a strong EU engagement in the dialogue".