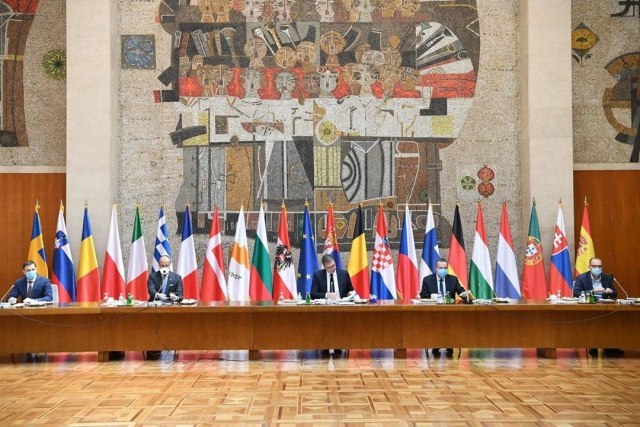 "Serbia is extremely grateful to the EU for financial assistance and any other kind of solidarity, not only since we have been fighting the coronavirus, but also in the period when we fought against the effects of the floods and then COVID-19," President Vucic said at the beginning of his address.

He said Serbia is offering assistance to EU countries.

"We have offered our support as we currently have some more protective equipment, even some respirators, if needs be, we could deliver it to an EU member state within 12 hours," Serbian President said.

Serbian President says he has offered condolences to all coronavirus victims in all EU countries.

He also spoke about Serbia's path to the European Union.

"We talked about the enlargement policy. The unambiguous position of the Republic of Serbia is that we are on a European path. Serbia will continue its European path in a transparent manner."

He also thanked everyone who worked hard for Serbia to receive financial assistance from the EU.

The head of the EU Delegation to Serbia, Sem Fabrizi, said that we are currently facing a difficult time. He praised Serbia's fight against coronavirus and said the health system has shown it can fight and endure this.

He said that everyone was aware of the magnitude of this crisis, but that a fantastic job was done thanks to the Ministry of Foreign Affairs, people from Serbia returned home, but also Serbian nationals came to Serbia.

"No one knows how long this crisis will last, but it is important for us to know that there is a common response. The European Council has designated assistance for the security network," Sem Fabrizi explained.

Fabrizi praised Serbia's efforts and achievements in the past years that has helped to overcome this crisis in the economic sphere.

"Serbia's path to the EU is something that makes the country stronger and more secure," Fabrizi said.

He stressed the importance of the messages brought by this meeting. "The message that came from today's talks is a message of unity, solidarity," the Head of the EU Delegation to Serbia noted.

Serbian President added that Serbia remains on the EU path.

"Serbia is committed to its European path. The EU is our final desired destination," President Aleksandar Vucic concluded.