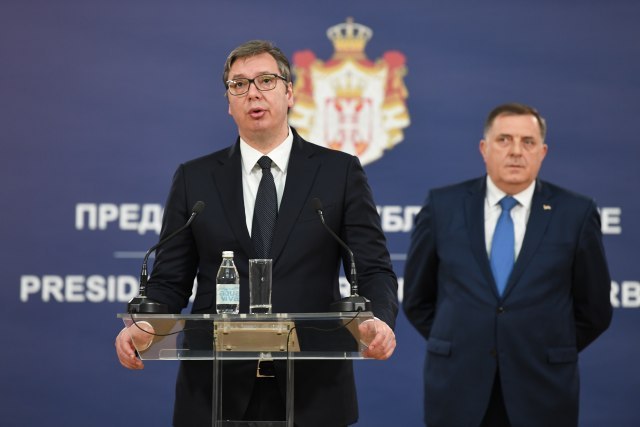 President Vucic said after the meeting that Serbia would send hundreds of thousands of protective masks, gloves and new respirators to Republika Srpska.

"Everyone in Europe and the world will be in a difficult economic situation, but Serbia and Serbian banks will be ready to buy Republika Srpska bonds," Vucic said. He said that he had good news that, from March 30 to April 3, Serbia had 8.999 jobless people on official records, so employment increased, and 2.000 remained unemployed since the crisis began.

"In the next two days, I expect that we will send aid to parts of East Sarajevo and Gorazde, but my request is that any other type of assistance to the Republika Srpska goes through Republika Srpska," Vucic said.

Vucic added that there was some encouraging news in the past 24 hours that would be discussed at a press conference to be held by doctors, but it was vitally important that we be disciplined next weekend.

"I would ask the pensioners to be patient a little more, just to show tolerance. It is still a great danger, the virus is still quite powerful," Vucic said.

He said he could not make exceptions on Easter and would again call on Patriarch Irinej to ask for services to be held but without the presence of people.

"All our televisions, I'm sure, will be interested in broadcasting and airing the liturgy and praying in their homes," he said.

Dodik said that Republika Srpska had received first aid from Serbia, and that it had requested a new contingent of aid today.

"If we didn't have an understanding on the part of Serbia, our medical system would experience problems," Dodik said.

He thanked Serbia and added that assistance to the economy and economic system was also essential. "We will take advantage of the opportunities we have to maintain employment in the Republic of Sprska," Dodik said, adding that some 800 workers have been laid off lately.

Dodik said he would have to focus on paying out 520 KM to the workers.

"One of the issues we have discussed today is the arrival of our biggest Easter holiday. We must not allow the expansion of the virus to spread because we were tolerant. We have agreed on the measures, we will have to extend the curfew," he concluded, asking the Orthodox worshipers to understand that.

"We all have the opportunity to express our love for Easter, but with respect for the measure," Dodik said.

Dodik praised the Montenegrin Coastal Metropolitanate's decision to hold a church service, but without gathering of the believers.

"Republika Srpska would have gone much harder in this epidemic without Serbia's assistance," Dodik said.