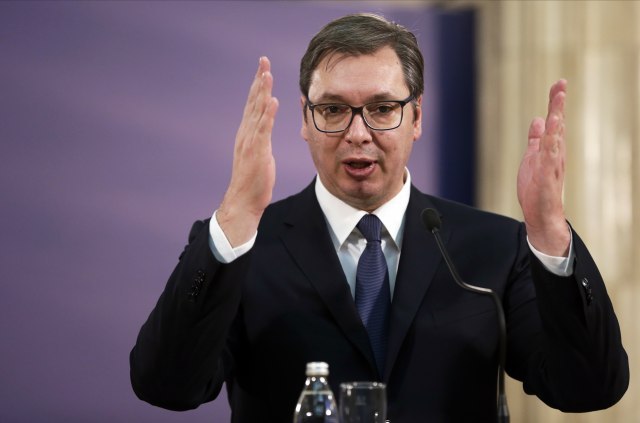 However, he reminded Kosovo Prime Minister that everything that results from mere force is even less worth, as was the case with Kosovo's seizure from Serbia by NATO aggression.

In a text to "Frankfurter Allgemeine Zeitung", Kurti said that signing something under pressure or consenting to something through threats or coercion cannot be valid and lacks validity, legitimacy, and Vucic adds: "This is the only thing I agree with Kurti."

He said that he would repeat Kurti's statement everywhere, because, as he explained, it implies that, everything obtained by force is even less worth:

"Kurti must take into account that everything that has been achieved by force, and by aggression against Serbia, by the terrible aggression of 19 countries against Serbia, which is more than a threat and is a direct coercion", President Vucic said.

"We will not say thank you when they suspend tariffs, but we will tell them how much damage they have done to us, unlawfully, what they have done against our country and our people, and we will continue to work, to try to make this damage incomparably less in the future," Vucic said to reporters in the village of Mala Remeta near Fruska Gora when visiting "Deuric" winery.

He stated that he doesn't intend to thank "the ones who ruined our economy".

Vucic quoted Kurti saying that signing something under pressure or consenting to something through threats or coercion cannot be valid and lacks validity and legitimacy.

Vucic stated that he was "very pleased" by this statement and added that he would quote it "on any occasion and the meetings he attended in the world" and would "ask" everyone to appreciate Kurti's argument, because, as he stated, "all that is obtained in Kosovo by force and aggression cannot be respected".

President said that America had taken a very rational and principled approach to the abolition of tariffs by Pristina.

"When we are asked by individual European partners to praise the partial abolition of tariffs, it is like when you have a bully in the house, who is beating a woman with his fists and feet, but says one day 'Starting from today, I will no longer use my fists and feet but, as a sign of goodwill, I'm just going to slap you". And then this woman should say, "I'm just happy about that, it's a wonderful sign of attention and we're now much better off", Serbian President concluded.