Serbian Progressive Party first submitted a list to the Republic Electoral Commission for the upcoming parliamentary elections in Serbia, scheduled for April 26 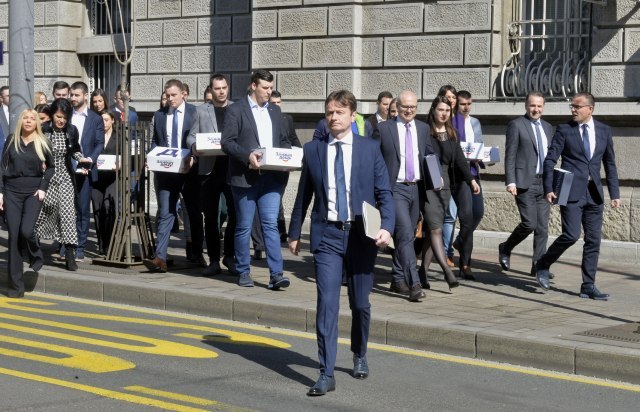 The list holder, with about 50.000 signatures collected in a few hours, is the SNS leader Aleksandar Vucic, and the first on the list is the Minister of Agriculture Branislav Nedimovic.

On the list of "Aleksandar Vucic - For Our Children", among the candidates for the 250 members of the Republican Parliament, apart from the Progressives, are representatives of SDPS Rasim Ljajic, PUPS, Socialist Movement, and Bogoljub Karic's Strength of Serbia Movement (PSS).

The list was submitted by the President of the Executive Board Darko Glisic, the Minister of Agriculture at the top of the list Nedimovic, SNS Vice President and the Mayor of Novi Sad, Milos Vucevic, SDPS President Rasim Ljajic, President of the Socialist Movement Aleksandar Vulin, PSS MP Dragomir Karic and others.

According to the Law on the Election of Deputies, the REC will announce the electoral list no later than 24 hours upon its receipt.

Election list will be submitted at 1 p.m. in the Assembly of Vojvodina

SNS will submit the election list for MPs in the Assembly of Vojvodina at 13:00, for the elections that will also be held on April 26.

The list will be submitted at the premises of the Provincial Election Commission in the Assembly building of AP Vojvodina, the provincial election commission announced.