"You can't tell us not to do our job"

Addressing the public, following his visit to Washington DC, the President of Serbia said that news on Belgrade-Pristina deal being reached is false 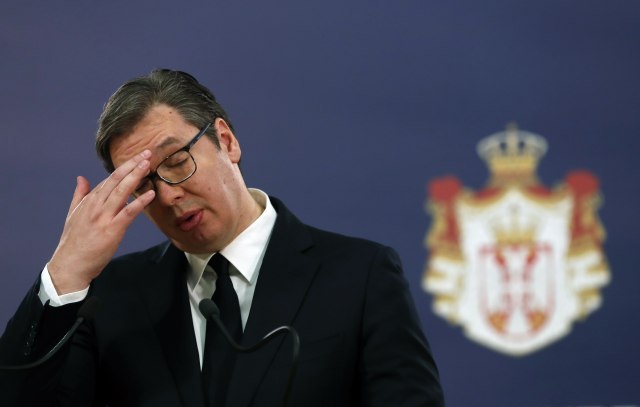 "My interlocutors in Washington have shown a good will to listen to us, and I am not someone who bases politics on dreams and imagination, especially when it comes to Serbia, but I think the door to our politics will be at least open," Aleksandar Vucic said.

He also said that in recent days there was a lot of fake news that a big agreement was reached between Belgrade and Pristina, and that a plan was made. "No, it has not been discussed and it does not exist. If it did, I would be the first to tell you, because I never hid the smallest things from my people," Vucic said.

"Grenell was right in saying that there was no big deal. I said there were no substantive discussions until the fees were abolished," Vucic said.

He also noted that a "mini-Schengen" was also being discussed in Washington, which is of the utmost importance because it would accelerate the faster flow of people, goods and capital. Vucic also says he is going to Berlin in the next 10 days, where he will have an important meeting with German Chancellor Angela Merkel, and Kosovo will be one of the topics.

Commenting on statements from Pristina, after Sierra Leone withdrew recognition of Kosovo's independence, stating that Kosovo made a sign of goodwill by partially abolishing tariffs and Serbia "giving them this in return", Vucic said it was as if someone had hit you, then he comes and says now I will stop hitting you, I will only slap you a little. In doing so, the following does not allow you to change the lock to protect yourself.

Serbia's stance on resuming dialogue with Pristina is clear and all that I have said to the former EU administration three years ago didn't change.

"You cannot tell us not to do our job. The moment you sign that you will not seek admission to Interpol, UNESCO and other international organizations before the end of the dialogue, we are ready to say that we will 'pause' the diplomatic offensive aimed at withdrawing independence of the so-called Kosovo", he noted.

He said that if a deal is made, it must be a compromise. "Nothing has changed in our politics," he said, pointing out that it is crucial for us to maintain peace and stability.

"To those who think it's time for war calls on all sides, I want to say that they would yell that way one evening and the other day would say that we have destroyed Serbia and the future of our children. I do not want to participate in such political turmoil". I will keep the country from destabilization, we will protect our national interests that they could not guard from 2000 to 2012, or from the 1990s to 2000 neither," he stressed.