The President of Serbia gave a speech at a conference of the American Israel Public Affairs Committee, emphasizing the friendship between the two nations 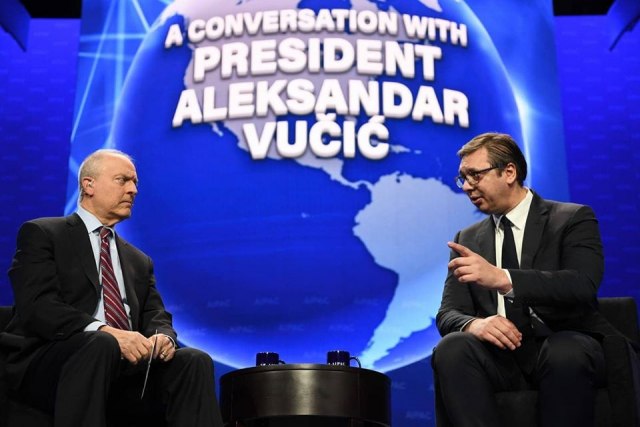 First of all, he thanked his hosts on their hospitality on behalf of all Serbian citizens.

"Thank you to the leadership of AIPAC for hosting me. It was an honor to speak at the #AIPAC20 Policy Conference. I strongly support AIPAC's mission. Serbia, Israel, and the United States can achieve much by working together and jointly pursuing our common interests".

"There are many things that connect our two nations. We have experienced a difficult fate in World War II in the Jasenovac concentration camp, run by the Nazi, vassal state of Croatia," Vucic said.

He stressed that we have always supported each other, which is the case today.

"In memory of all the victims of the Holocaust, an Israeli flag was raised at the Presidency of Serbia, and I said at the time that I was proud of the friendship with the Jews and I was glad that the flag was there," Vucic said, followed by applause.

He took the opportunity to announce the opening of the Serbian Chamber of Commerce in Jerusalem.

"We were trying to find the best possible way to do something official in Jerusalem. Soon, we will open not only the Serbian Chamber of Commerce in Jerusalem, but also the official State Office in Jerusalem," Vucic concluded.