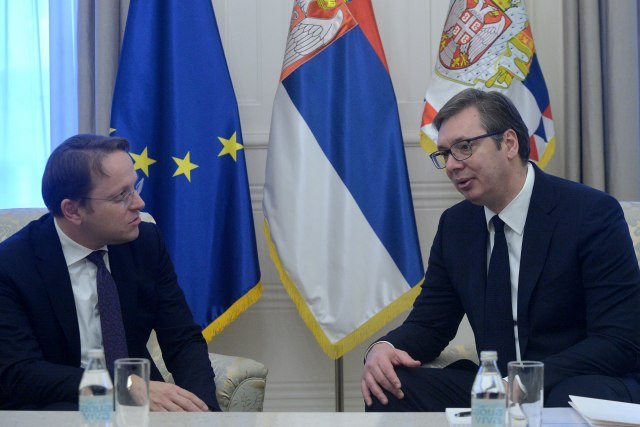 Várhelyi arrived to Belgrade a day after a new methodology for the EU accession process was presented in Brussels.

For the first time of his visit to Serbia, President Vucic welcomed Várhelyi in front of the Presidency building.

Várhelyi and Vucic discuss the continuation of European integration process, and after the meeting, the two officials will hold a joint press conference.

Várhelyi is expected to outline the future plans of the European Commission for the region and comment on the revised accession methodology.

It is envisaged that, in the presence of Vucic and Várhelyi, a financing agreement on project financing of IPA 2019, worth about EUR 138.5 million, will be signeg by Joksimovic and Fabrizi.

Ahead of the visit, the new Enlargement Commissioner said he looks forward to the first visits to the two countries participating in the EU accession talks, Serbia and Montenegro, where he will be heading after Belgrade visit.

"I look forward to discussing progress in the political dialogue ahead of the elections in both countries, as well as the results of reforms concerning EU accession that are evident in the area of the rule of law", Várhelyi said, and the EU Delegation to Serbia announced.

Várhelyi, together with mediators in Serbia's inter-party dialogue, Tanja Fajon and Vladimir Bilcik, will meet with Serbian Assembly Speaker Maja Gojkovic, as well as political parties participating in the dialogue.

Thereafter, a joint meeting with opposition parties not participating in the dialogue is planned, with the Commissioner and MEPs reportedly sending a single message to the EU on the need to "continue to work for inclusive, free and fair elections in spring 2020".

Várhelyi, Fajon and Bilchik will hold a joint press conference.