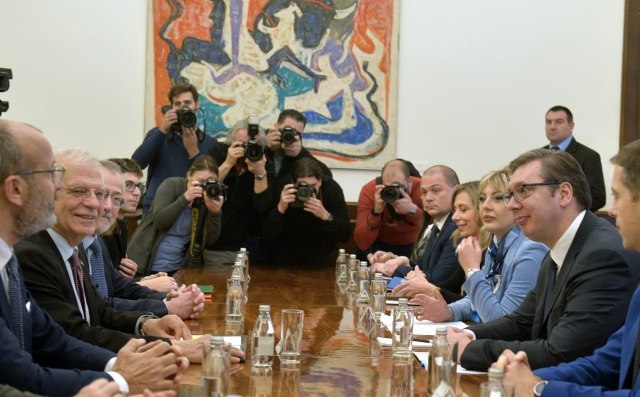 The meeting at the Presidency building, which began at about 12 o'clock, is also attended by the Minister for European Integration Jadranka Joksimovic and Head of the EU Delegation to Serbia, Sem Fabrizi.

After talks with the President, Borrell will also meet with Prime Minister Ana Brnabic at about 3.30pm.

Borrell, who was in Pristina on Thursday, said ahead of his arrival that his first official visit to the Western Balkans demonstrates clear EU's commitment to the region's perspective, stability, security and prosperity.

Prior to his visit to Serbia, he said in an interview with Tanjug that he would personally conduct the Brussels Dialogue and be the main interlocutor for the authorities in Belgrade and Pristina, instead of the EU Special Representative taking up this role.

Borrell recalls that the EU has made it clear that the "key" to Serbia's entry into membership is the normalization of relations with Pristina through a comprehensive legally binding agreement and internal reforms with a focus on the rule of law and the media.

During his visit to Kosovo, Borrell spoke with the President of the Interim Institutions in Pristina, Hashim Thaci, and with party and non-governmental representatives.

Borrell said after meeting with Thaci that the EU would mediate dialogue between Pristina and Belgrade, without competing with the U.S. Special Envoy for Belgrade and Pristina of the U.S. President Donald Trump, Richard Grenell.