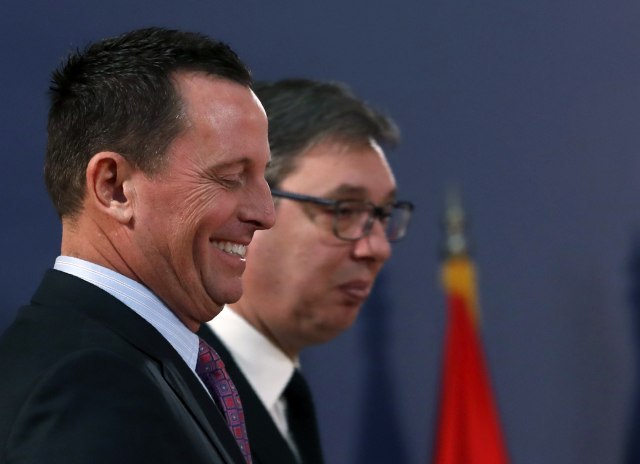 Richard Grenell thanked Vicic for his hospitality on the joint press conference and said he would "push both sides" to reach an agreement in the dialogue.

The taxes must be abolished, he said, adding that the campaign to withdraw recognitions of Kosovo's independence must end. Grenell said that yesterday in Pristina, during his meetings with leaders and the business community, he said that the 100 percent tax on Serbian goods must be abolished.

However, he made the same request in Belgrade, regarding the recognition withdrawal campaign, which has to stop, Grenell said.

Asked by a reporter if this was fair, Grenell said:

"When we talk about whether something is fair or not, it is not for me to say it, it is up to me to bring the two sides together and it is up to the parties to decide. The parties will tell me what they think and what they want. I try to focus on a better future of the people in Kosovo and in Serbia. We must do everything we can to overcome what everyone sees as an open conflict. If both sides fail to reach an agreement, we will withdraw".

Grenell pointed out that yesterday in Pristina, at meetings with all leaders and the business community, he conveyed that 100 percent taxes on Serbian goods must be abolished as they are unacceptable.

"I'm making the same request here, regarding the recognition withdrawal campaign, which has to stop", Grenell said.

He said that "we must move towards the economy," job creation, which means abolishing taxes which will lead to greater wealth and a more normal situation when it comes to trade. Grenell said he also met with businessmen in Kosovo while visiting Pristina, who said they agree the tax must be abolished.

"We are all focused on that and I am convinced we are going in that direction", Grenell said.