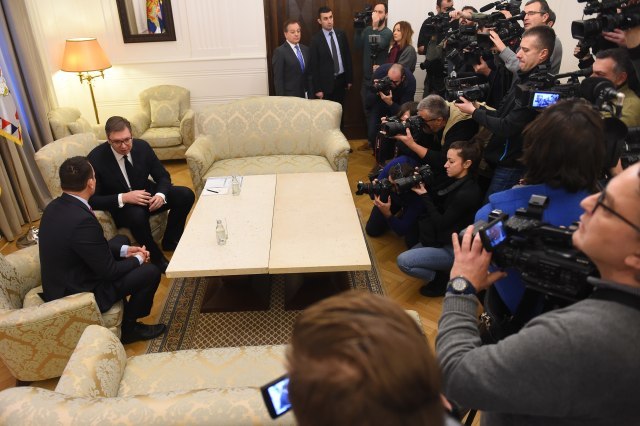 The meeting between the President of Serbia and Trump's envoy began at 9.00, Tanjug reports.

Grenell, who arrived in Belgrade from Pristina, said that Pristina must lift the taxes and would ask Belgrade to suspend its campaign of derecognition of Kosovo's independence.

Media in Serbia say that America wants an expedited settlement of the Kosovo issue, but also finalizing the two-party agreement at a new international conference that would be a in the form of a "new Dayton".

According to the Serbian Telegraph, there is no timetable and precise date for reaching a new agreement, such as the one that ended the conflicts in Bosnia-Herzegovina, concluded in Dayton, but Grenell's determination is that the job entrusted to him by US President Donald Trump should be finished as soon as possible.

The newspaper claims that the US agreement will include abolition of Pristina taxes, continuation of negotiations at an accelerated pace, border crossing, annexation of northern Kosovo to Serbia proper, US investments in the region, especially to northern Kosovo, which would belong to Serbia, arrival of US companies, investment in travel infrastructure, boosting trade between Belgrade and Pristina and accelerating EU integration process.

"This is not a matter that is resolved within a few days, but it is a topic that the current American leader wants to address in a way that would secure a lasting agreement with a compromise between the two sides," the Serbian Telegraph quoted a statement by an unnamed source.

As the source adds, in addition to the political segment, which he claims does not rule out the partitioning of the province "by which the north of Kosovo would be annexed to Serbia," Grenell's plan also includes an economic package.

The source of Srpski Telegraf states that Grenell insists on this economic moment, because he is convinced that this is a way to connect the region as soon as possible, to establish cooperation that would facilitate the further path.

Serbian Chamber of Commerce President Marko Cadez told the newspaper that precisely the new economic opportunities and foreign investment "in Kosovo and Serbia" could make it easier to reach a final agreement in dialogue and normalization of relations.

"The whole Kosovo problem can come closer to normalizing, above all the relations between Serbs and Albanians, through the economic interest that we have in common. Grenell really puts the economy at the forefront and starts from what benefits it, first of all, to the economy, because businessmen always consider mutual interest”, Cadez explains.