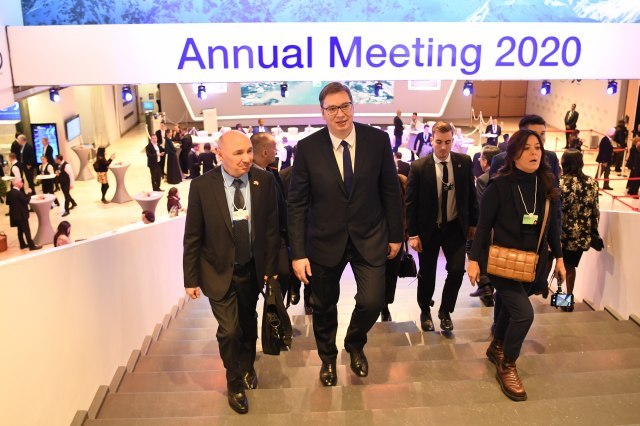 Serbian President, who attended the opening of the Forum last night, first participates in the panel "Diplomatic Dialogue on the Western Balkans", followed by a working lunch labelled as "Generating Growth for Central and Eastern Europe".

As he announced last night, he will speak at both meetings about how he sees the future, including "mini Schengen", economic cooperation and other issues.

Vucic will also attend US President Donald Trump's address to the Forum's participants, while on the sidelines of the event, he is scheduled to meet with Robert O'Brian, US President's National Security Adviser and the President of the European Bank for Reconstruction and Development, Sumantra Chakrabarti.

Vucic said on the eve of the opening of the Economic Forum that it is very important for Serbia to be in Davos.

According to Vucic, Serbia’s presence at the World Economic Forum is important for its image and as an opportunity to invite investments.

“We have been here for six years in a row and we have the biggest presence of all the countries of southeastern Europe. This is important for us because of political contacts and to create a better image and to invite business people to invest in Serbia”, Vucic said.

On the first day of his stay in Davos, Vucic had discussions with a number of officials, including European Commission Head Ursula von der Leyen and World Economic Forum President Børge Brende, as well as Armenian President Armen Sarkissian.

Namely, the main topics of this year's gathering are climate change and action, and one of the most important sessions is entitled "Preventing the Climate Apocalypse".

The Summit, which will run until January 24, will see some of the world's largest companies, and the organizers of the Forum will urge everyone to commit to reaching net zero carbon by 2050 or earlier.