Vucic criticized prosecutors and judges as he believes that, despite the evidence received from the police, the judicial system is not doing its job effectively 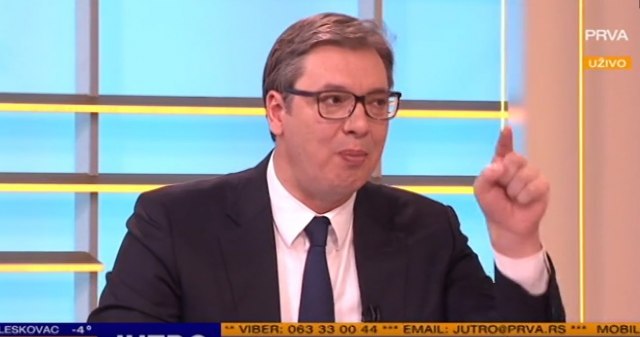 He made a guest appearance on TV Prva in the Morning program and added that he could not change anything because everyone would accuse him of interfering with the independence of the judiciary.

Vucic said that he, as president, has no opportunity to change things, because there is a permanent judicial office and "nobody can touch them" when it comes to that, otherwise he would receive criticism from both within the country and the European Union.

"There is a man who claims that another man paid him and ordered him to kill a man, but they do not want to take him as a protected witness", Vucic said, reiterating that there is Filip Korac who organizes the sale of drugs to children in schools in Serbia and that the Serbian judiciary suspended the proceedings against him.

According to him, even when the police obtain sufficient evidence and pass it on to the prosecution and the court, they always find some procedural obstacles in the judiciary. "But I cannot change the judge, the prosecutor or the police officer because they will say that I influence the judiciary. They have a permanent judicial office and nobody can touch them", he said.

According to him, in other countries, such as France, the executive authority elects prosecutors and judges, and the they fall under president's jurisdiction and he is responsible for their work, but the international communities and the domestic public would not allow such a thing to apply in Serbia.

"I told French President, at midnight at the Champs-Elysees, 'Listen, you Emanuel... You would anyhow be in no position to open chapters 23 and 24 now'," Vucic said.

Speaking about the Jovanjica affair, Vucic stated that the case is being forced into an affair all the time, based on pure lies.

"I was not in contact with the owner of that farm, but if I went to visit the estate of a successful businessman who grows fruits and vegetables there, what would I do wrong?" Vucic inquired.

"It happened", he adds, "that my brother Andrej had never been in contact with him, as evidenced by the expertise of his phone. Presently, the viber communication from his phone is being checked, and when it is established that there was no contact, what will we do then?", Vucic asked while visiting TV Prva.

Asked by the presenter whether proceedings would be instituted against those who spread fake news and spread panic, Vucic replied that he had never sued anyone for any lie, not even those who threatened to rape his minor daughter, because if only one of them was kept in the police for at least 24 hours, he said, media would immediately chase after him.

"At the end of the investigation, police and the prosecution will report that my brother and I have not been in contact with the owner of Jovanjica", Vucic added, noting that it is easy for him to defend himself against lies because people know that he is saying is true.

Regarding the criminal charges filed by Bosko Obradovic against Minister Stefanovic and his father, the prosecution should respond and give all the answers whether or not there were criminal offenses.

Vucic says he was not interested in Obradovic's lawsuits, but now it turns out that Obradovic is filing charges for trading in influence, not for the serious crime he was talking about.

President also said that he had no problem with either the issue of Krusik and that competent authorities should deal with it.

Miroljub Jevtic, the arrested director of the railways, made the allegations against Minister Mihajlovic for which he did not present evidence. He notes that he had talked to Minister Mihajlovic and believed her when she told him that she has nothing to do with it.

"If there is anything to it, let them prove it", Vucic said, asking what else he could and should do about it. "Should I put a bag on her head to get answers?", he said ironically, alluding to the case of Marko Bastac who was accused by his godfather Lazar Lesnjak of racketeering investors in Belgrade.

Asked by a journalist why something was not done about the Bastac case and why he himself did nothing to make the prosecution work more efficient, because, he manages the system, Vucic says: "I'm not the prosecutor or the judge, it's not the system I'm running, I have no connection with that system, I want the system to work in favor of the people."

He also said that he had no problem with MEP Tanja Fajon.

Vucic said that Fajon was highly concerned about the media situation in Serbia, as well as over the boycott of the election on the part of opposition, and when asked why he quarreled with her, he said that he did not quarrel with her, he was only protecting Serbia's interests, defending his country, and acting as president of the sovereign state.

"However, she doesn't notice the extent to which the rights of Serbs in Slovenia are endangered. People should know that Serbs are the largest ethnic group in Slovenia, and the only ones who are not entitled to national minority right. That fact doesn't bother her at all", he said.