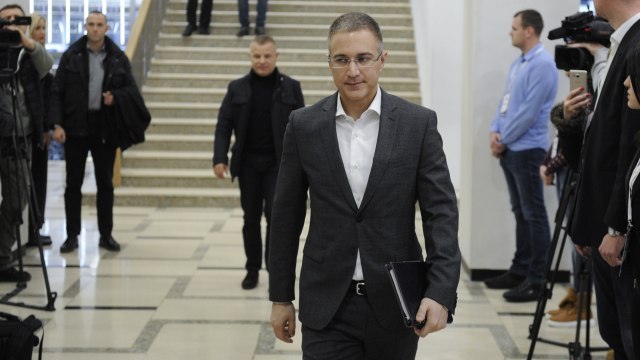 Stefanovic added that if Vucic retires from politics, he will do the same.

"If he retires, I would not hold any public or party position either", Stefanovic said in a New Year's interview with Novosti.

In this way, he denied opposition claims he headed a faction within SNS, and said he belonged only “to Aleksandar Vucic’s faction”, adding: "I don't see my political future beyond Vucic".

Asked if he believes he will be part of the new government if the Progressive Party wins, Stefanovic says he is not burdened with the topic, as he said he was not born in the ministerial armchair, nor is he aiming to retire there.

"The goal is for people to say whether we are doing the right thing, whether people in the Ministry of Internal Affairs have more vehicles, better salaries, whether crime is reduced ... If the answers are negative, I have nothing to look for here. And if they are positive, then let's see if we can do better", Stefanovic said.

Commenting on the media and opposition accusations of his father’s involvement in arms trade deal affair, Stefanovic said he didn’t care about “such fabrications and here-say far from the truth,” and that “all institutions said those claims were untrue", adding that this is the matter of President's assessment whether he would be entrusted with any future state task.

"It is a matter of the President's assessment and I fully understand that sometimes false accusations can do you harm. I would understand if it would be the subject of some discussions between me and him. And as long as he thinks it makes sense that we do this together and fight together, I will work with him", Stefanovic said.

He estimated that the election conditions are better today than in 2012 when the SNS won, adding that he "could not even dream" of the media space that the opposition now has, and that they rarely appear on the Public Service, except in mandatory terms.

"When I talk to the OSCE and ODIHR representatives, they say that there is progress today. I am convinced that during the observation mission they will see a clean and good election process in which Serbian citizens will declare what kind of future they want", Stefanovic said.

As the biggest security challenges of the next year, Stefanovic sees the irresponsibility of certain people in the neigbouring countries, the continued fight against crime and corruption, but also the challenges of migration and potential terrorism.

He also said that 110 Islamists had returned from the Syrian front in Kosovo only in April this year, and stressed that Pristina was obliged to "keep an eye on them" not to commit any terrorist act, adding that our security services are also being employed to prevent that from happening.

He also emphasized that the activities of foreign services have increased in the last two or three years, not only in Serbia, but throughout the region, and that they are trying to pursue their interests by doing so.