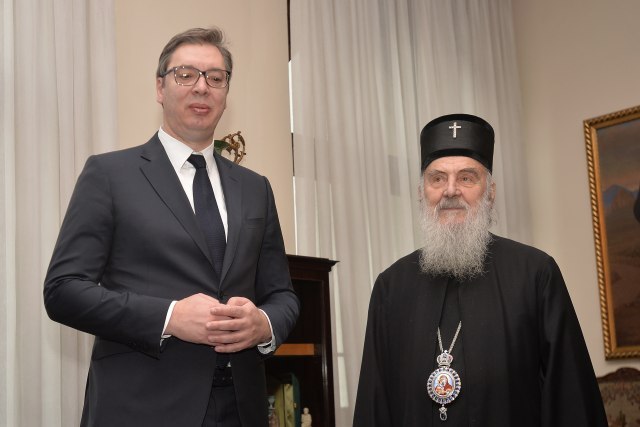 Serbian President Aleksandar Vucic stated this today, adding that unity of the Serbs, wherever they live, is crucial.

"I hope this is not anyone's idea," Vucic said, responding to a reporter's question whether he sees a way out of the crisis in Montenegro, since it is obvious that both sides are determined to persevere.

Vucic points out that there is not much that Serbia can do about it and that it should act primarily with employing words, knowledge, legal and other expert opinions.

The President said that we should inform everyone in the world what it was about, the Venice Commission, all other commissions, bodies, forums and organizations.

"On the other hand, to send a clear message to the Serbian people that we are united and that there are no differences between us Serbs, regardless of the boundaries we draw and which exist between us", Vucic said.

He says that there is no difference between a Serb living in Belgrade, Banja Luka, Podgorica, Budva or any other city, and that all Serbs feel what Serbs in another country feel.

He said it was important that the key message that the Patriarch sent today is the unity of the Serbian people.

Patriarch sends the words of reason and appeasement

Serbian President Aleksandar Vucic said that he had heard from the Patriarch Irinej today the words of reason and appeasement regarding the situation in Montenegro, that the state would help and act jointly in protecting the interests of the Serbian Orthodox Church and the Serbian people, but that they both agree that full unity of Serbian people is necessary.

"I believe that in the coming period, after such words of the Patriarch, who called for calm, but also a determination not to allow the seizure of Serbian shrines, that everyone will be brought to reason and that we will be able to look to the future and consider economic results", Vucic said.

He told reporters after a meeting with Patriarch Irinej, with whom he discussed the events in Montenegro after the adoption of the Law on Religious Confessions, that the state delegation had come for advice, to hear what the Patriarch's thoughts were.

"We have heard the words of reason, words of appeasement, words that mean support for the Serbian people. What the Patriarch insisted on and we agreed was the need for full unity of the Serbian people and to jointly understand what national problems we face while respecting the national borders of other countries", Vucic said.

He stated that the unity of the Serbian people, which the Serbian Church had always worked for, especially Patriarch Irinej, was something the state would continue to work on, by investing in cultural institutions, textbooks in the Serbian language, supporting the preservation of cultural heritage throughout the region.

Vucic said that he had discussed with the Patriarch the necessity of preserving our shrines, churches and monasteries, and emphasized that the Patriarch had said that he was considering forming an expert international commission in the future, which could also in international forums, institutions and organizations in the best possible way protect the interest of the Serbian Orthodox Church and the Serbian people, as well as in Montenegro.

"As far as the state is concerned, we will, in any case, help and act jointly on the advice of His Holiness," Vucic added.

He noted that he was very happy to be the President of the country at the time when the SPC was headed by Patriarch Irinej, who has a huge heart for the Serbian people and understanding of the country and its needs.

"As much as the state can help the church, we will always be a support, regardless of whether we will always agree with every archbishop on every issue", Vucic emphasized.

He stated that he was convinced that peace would be preserved for the Serbian people wherever they lived and that we would be able to protect the shrines that our people have managed to preserve for centuries.

President Vucic added that he was personally very proud that the current government, compared to all previous ones, had the largest role in the construction of the St. Sava Temple.

These are things that are not only religious, not just something that will belong to our people's cultural heritage, but something that will serve our people in every sense, even in tourism. "It will be a gathering place, symbolic for all Serbs and Orthodox believers from all over the region. I am proud that we will finish this work next year," Vucic said.

He added that this time, as in previous meetings, the Patriarch expressed concern about the low birth rate and thanked the SPC chief for always emphasizing the need to have more children and not lose entire generations.

Vucic said that he informed the Patriarch of everything that had been achieved this year and expressed his expectations that the results would be even better in 2020.

"I am really pleased with the hard work, the good results, and the Patriarch is, as always, caring for the entire Serbian people," Vucic said.

He added that the Patriarch asked to continue his support for Republika Srpska.

"I promised that Serbia will continue, with respect to the integrity of Bosnia-Herzegovina, to support our people west of the Drina River, which has never been greater than this year," Vucic said.

President Aleksandar Vucic said today that he is always ready for a state-level meeting with the representatives of Montenegro and announced a meeting of regional leaders in Karlovci or Subotica at the end of January, which should include Montenegrin President Milo Djukanovic.

Vucic told reporters after meeting with Patriarch Irinej when asked if it was time for a summit of the two countries, that he was always ready for it.

"I think there is a meeting that is scheduled in Karlovci or Subotica, in late January or early February, that would gather many leaders from the region. I think it is possible for President Djukanovic to come," Vucic said.

He said he also spoke with Djukanovic in Tirana this month and that he has no problem talking, noting that the two see things in a slightly different way.

"But it is our duty to respect the state of Montenegro, to understand the needs and requirements of the Serbian people. Not to be ashamed of being of Serbian origin, it does not occur to us, we have not offended anyone, we have done no harm. If anything bad happened to our people, there is something good in it after all - the presented unity of the Serbian people", Vucic said.

That unity, he said, would not have been possible had it not been for Serbian Patriarch and, as he said, the Serbs did not mature as a nation and realized that they should not gather because we are against someone else, but because we are in favour of something.

"We should not build our unity on the negative approach, but on how we will teach children Serbian, have the same letters, guard our Serbian Orthodox Church, as we allow everyone else to cherish their religious feelings here in Serbia", Vucic concluded.

The meeting between Patriarch Irinej and Serbian President Aleksandar Vucic was held today at the Patriarchate building in Belgrade, shortly after ten o'clock. In addition to the Patriarch and the President, the meeting was also attended by Bishop Stefan, Foreign Minister Ivica Dacic and Secretary of the President of the Republic of Serbia, Nikola Selakovic.

Vucic had earlier announced that the topic of the talks would be the formation of a specific commission to see how to legally stand before world and international organizations regarding the Montenegrin Law on Freedom of Religion.

"We will discuss how to help our church. I am not an expert for the metropolises and dioceses, for me, there is only Serbian Orthodox Church," Vucic said in a guest appearance last night on the RTS program "Oko".

He said that Serbia's hands are quite tied and that it is doing its best under the circumstances.