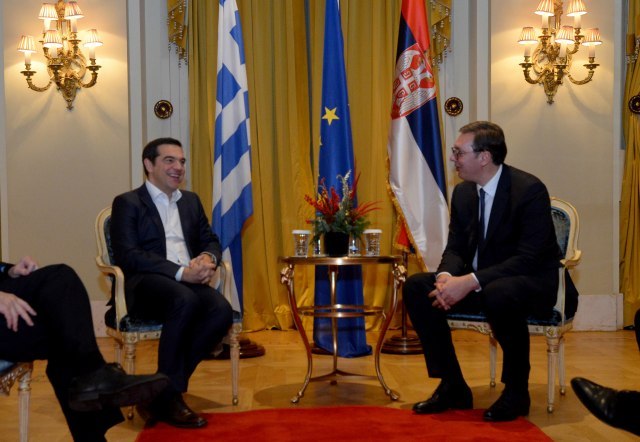 With that meeting, Vucic ended his two-day official visit to Greece.

Vucic and Tsipras cooperated while Tsipras was still at the helm of the Greek government, as part of regional co-operation between Serbia, Romania, Bulgaria and Greece.

During his visit to Athens, President of Serbia spoke with the Greek President Prokopis Pavlopoulos, and Prime Minister Kyriakos Mitsotakis, met with the country's businessmen, the head of the Greek Church Ieronymos II, and was presented with the Gold Medal for Merits of the City of Athens.

Serbian President Aleksandar Vucic and Greek Prime Minister Kyriakos Mitsotakis signed a joint declaration today on establishing strategic partnership between the two countries. The Declaration addresses six areas of cooperation: politics and foreign policy, security and defense, science and education, economics, culture and the environment, which, according to Vucic, put a seal on decades-long and centuries-old friendships that no one will be able to break.

Vucic told a joint media conference that the Declaration is hugely important to Serbia which “is a loyal and true friend of the Greek people and state”. “I am convinced that geo-politically, the future brings greater respect for independent and sovereign countries and their friendship”, Vucic concluded.

Serbia fully supports the territorial integrity of Greece, both on land and at sea, Serbian President said, stressing that Greece will always be able to count on the absolute support of our country, thanking Greece for "supporting international law on the issue of Kosovo, which is of exceptional importance for Serbia".

"It is an important task for Serbia to always back and support Greece, as I'm sure our Greek friends will understand that we always count on their support and that we are confident that our back is safe when Greece is behind us", Vucic said.