"The Highway means life": Signed contract for the construction of Moravian corridor

A commercial contract has been signed for the construction of the E-761 Highway, road section Pojate-Preljina (Moravian Corridor) with Bechtel Enka UK Limited 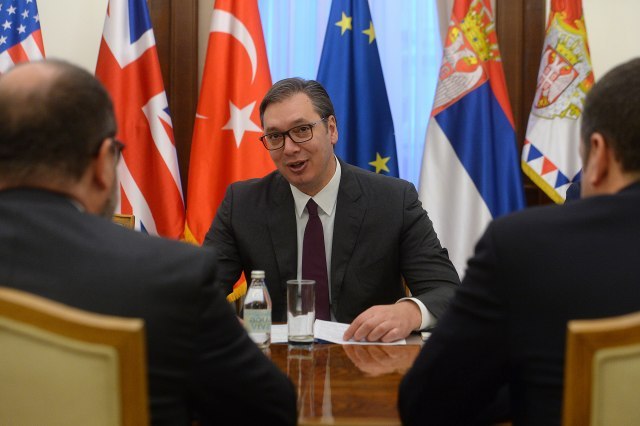 The signing of the contract was also attended by Serbian President Aleksandar Vucic, as well as Deputy Prime Minister Zorana Mihajlovic.

Michael Wilkinson from Bechtel Company addressed gathered people in English and said they were happy and excited about the project that they are going to implement in Serbia.

"We have been working on the project for over two years and today we have started a great friendship with the Serbian government", Wilkinson said, adding that this highway will change the lives of the people who live here.

President of Serbia thanked him and congratulated the Ministry of Construction, the company Bechtel Enka, but first and foremost the citizens and people of Serbia, especially the people who live in Moravica, Raska and Rasina districts, because, as he says, they get a new life.

"The highway means life. This is a road that people have been waiting for decades, firmly believing that it is possible for someone to build it," the president said.

"Construction deadlines are very good," the president says, adding that the Cacak-Kraljevo highway will be completed in less than three years.

The president points out that the highway will be digital and the widest Serbia has.

Vucic added that the construction would proceed quickly because these were extremely efficient companies, and that 150 million euros would be paid from the budget immediately for that purpose, which indicates that Serbia is financially in a great situation.

Vucic thanked the UK government for the funding, adding that he had heard about Enka a long time ago and that he believed in them and in good results.
"Many thanks to our Turkish, American and British friends", the President said, welcoming the ambassadors of these countries.

As he says, this will attract many tourists, especially for Vrnjacka Banja and other places in the vicinity. "This way, they will reach Vrnjacka Banja in an hour and a half easy drive, more precisely in an hour and 20 minutes", Vucic said, adding that this time he would connect the west and east of the country.

"Investors will find it easier to invest in this area, young people will stay in the country because they will see that their children can expect a better future", the president concluded.