Vucic and Putin in Sochi: "I'm not optimistic when it comes to compromise on Kosovo"

Strategic partnership between Serbia and Russia is developing and strengthening on a daily basis, Putin claimed at the start of the meeting with President Vucic 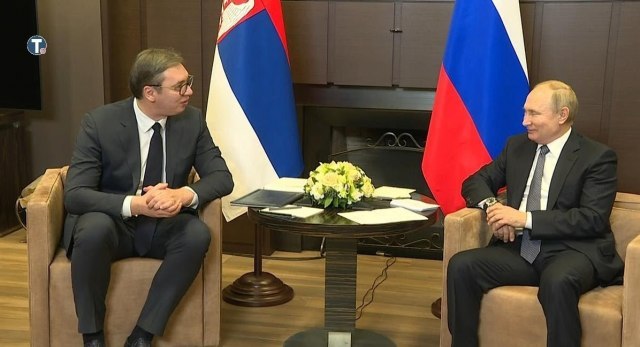 Putin said he was expecting him again in Russia next May.

Putin welcomed Vucic and stressed that he was very pleased to see the President of Serbia.

"Thank you for accepting our invitation, our relationships are evolving, our strategic partnership is being reaffirmed and strengthened on a daily basis, both in political and economic relations, as well as in the security field", Putin said at the beginning of the meeting, which was open to the public.

According to the Russian President, last year foreign trade between the two countries increased by two percent, and in the period January - September this year, by additional nine percent.

Putin added that joint committees are actively working on developing relations between the two countries, and that he will discuss it further with the Serbian President during the visit.

Russian President has told Vucic that he is expecting him in Russia again in May next year.

Serbian President Vucic added that he would be honored.

Serbian President Aleksandar Vucic said at the beginning of his talks with Russian President Vladimir Putin that he was not optimistic when it came to reaching a final compromise solution between Belgrade and Pristina.

Then, announcing topics he wants to discuss with the Russian head of state, Vucic informed Putin that the gas pipeline through Serbia is practically completed, which represents a great chance for the development of our country and which will bring better future to the citizens.

Addressing Putin in Russian, Vucic said he was glad to meet again and thanked him for the time the Russian President had set aside for this meeting, which is personally a great honor for him.

"Every meeting with you is of great importance for Serbia", Vucic said, addressing the start of the meeting, which will continue in four eyes.

The President once again thanked Putin for his continued support to Serbia in preserving its territorial integrity and national interests.

"But I have to tell you that I am not optimistic regarding reaching a final compromise solution between Belgrade and Pristina. However, we will discuss this issue together", Vucic said.

He pointed out that the economic cooperation between Serbia and Russia is improving and that the trade in goods is constantly growing.

He reminded that projects with Russian Railways (RZD) are being implemented in Serbia, and praised the responsibility and professionalism of Russian partners.

Vucic recalled Putin's visit to Belgrade early in 2019, which he says the Serbian citizens fondly remember, and invited Russian President to come to Serbia again.

"We are expecting you to visit our country in the shortest possible time", Vucic said.

On the eve of the meeting, President Vucic announced that the topics of talks with the head of the Russian state would be all key issues - from Kosovo and Metohija, the situation in the Western Balkans region, to how Putin views the political situation in Europe, Eurasia and worldwide.

The issues such as energy and the economy in general will be discussed, as it is crucial for Serbia to have bilateral co-operation with Russia and improve trade.

Serbian President Aleksandar Vucic meets with Russian President Vladimir Putin at the Bocharov Ruchey residence in Sochi today.
The two presidents will first have a tête-à-tête meeting and then continue their talks with delegations at a working lunch that Putin is holding in honor of the Serbian President.

On the eve of the meeting, President Vucic announced that the topics of talks with the head of the Russian state would be all key issues - from Kosovo and Metohija, the situation in the Western Balkans region, to how Putin views the political situation in Europe, Eurasia and worldwide.

The issues such as energy and the economy in general will be discussed, as it is crucial for Serbia to have bilateral co-operation with Russia and improve trade.

Vucic stressed that part of the talks will be devoted to cooperation and joint projects on the modernization of the Serbian railway network, while much attention will be paid to the gas related issue.

The President stated that he expects Russia to assist in the gas supply, given that the entire Serbian industry depends on it, and stated that gas is becoming a key issue for us, because it is not known what will happen in the relations between Russia and Ukraine in terms of gas supply, and the whole country might be at risk if these issues are not resolved with Russian partners.

After the meeting, Putin and Vucic should address the media.

This is Vucic's 17th meeting with the President of Russia, and the third within a year.