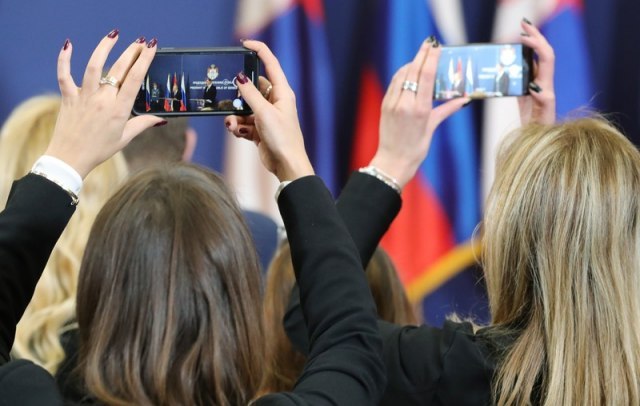 "Kommersant" daily states that after two major scandals affecting relations - espionage and the Serbian landmine scandal in Ukraine - the summit should answer the main question: is Serbia ready to be Moscow's key ally in the region or will it continue to balance between Russia and the West.

"Kommersant" states, citing unnamed sources close to the authorities in Belgrade, that Serbia will continue to try to maintain a balance in relations with Russia and the West, avoiding obvious leaning on one side.

RIA Novosti reported that a series of scandals in Serbia, where Moscow was "involved again, was the only thing that cast a shadow on the meeting between Vucic and Putin".

RIA Novosti writes that relations between the two countries are on probation.

According to Russian experts, the meeting of Vladimir Putin and Aleksandar Vucic in Sochi could play a major role in the development of Moscow-Belgrade relations, writes Russia Today, adding that the two presidents will discuss urgent bilateral cooperation issues as well as international issues, as announced by the Ambassador of Serbia to the Russian Federation, particularly economy, especially cooperation in the energy sector.

"This visit will play a significant role", said Elena Guskova, head of the Center for the Study of the Modern Balkan Crisis at the Institute of Slavic Studies of the Russian Academy of Sciences, in an interview with Russia Today.

"During the recent meetings of Vucic with Putin and Dmitry Medvedev, several documents were signed. But now, most likely, it might be about including some content in those documents", she added.

On the eve of his trip to Russia, President of Serbia announced that it is quite possible that he and Putin will propose "their own topics" for this meeting.

According to experts, Russia and Serbia must improve bilateral trade. According to Moscow State University of International Relations (MGIMO) Political Science Professor Elena Ponomareva, it is "very important for both countries to exceed the level of four billion euros". Behind the official press release discussing "regional and international issues", according to Ponomareva, there is a desire on the part of Russian and Serbian leaders to exchange views on the most important topics for both countries.

"Views will be exchanged on the Ukrainian crisis, the situation in Syria, the behavior of Albanians in the Balkans, and especially on the Serbia - Kosovo territorial issue", she said.

According to Ponomareva, Belgrade is now under serious pressure from the West, especially NATO, but at the same time the country is trying to maintain military-political neutrality.

"We have two allies in the Balkans. These are Serbia and Republika Srpska, which is part of Bosnia and Herzegovina. And the issue of further NATO expansion rests precisely on the Serb factor", she concluded.

Guskova shares the same view, pointing out that statements about Russia's "destabilizing" role in the Balkans, which have often been voiced in recent years by Western politicians and centers of expertise, were prompted by the desire to break Serbia's important ties with the Russian Federation.