President of Serbia Aleksandar Vucic hosted a welcome reception for the President of Belarus, Alexander Lukashenko, in front of the Palace of Serbia 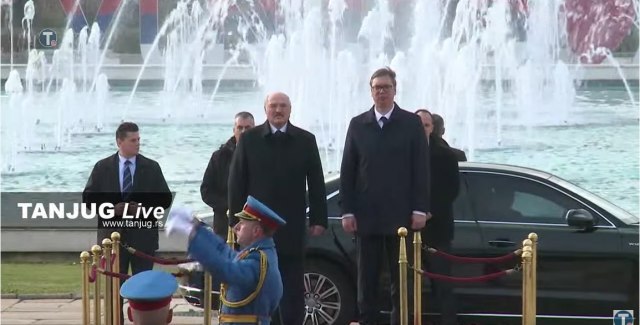 Namely, Lukashenko's visit is happening on the 25th anniversary of the establishment of diplomatic relations between Belgrade and Minsk, which has been marked in recent years by the strong development of economic cooperation and trade.

After the welcome, along with the line-up of the Guard of the Serbian Armed Forces, the anthems of the two countries and military salute in honor of the arrival of a high guest from Belarus, there will be a tete-a-tete conversation between the two presidents, followed by a plenary meeting of the delegations of Serbia and Belarus.

A ceremony to mark the exchange of six signed bilateral documents will take place next, after which Presidents Vucic and Lukashenko will address the media, on the occasion of Lukashenko's fifth official visit to Serbia.

The Belarusian delegation also includes Foreign Affairs Minister Vladimir Makei and Justice Minister Oleg Slizhevsky. The Serbian Chamber of Commerce, in cooperation with the Belarus Chamber of Commerce and Industry and the Embassy of Belarus in Belgrade will organize a Business Forum tomorrow in order to develop economic cooperation between the two countries.

By the value of exports Belarus is in 34th place as Serbia's trading partner - 37th in terms of the value of imports.

President of Belarus Alexander Lukashenko arrived on an official visit to Serbia yesterday, and was greeted at Belgrade's Nikola Tesla airport by Serbian President Aleksandar Vucic. Then, Vucic and Lukasheno, the only president who came to Belgrade during the air raids, had laid wreaths at the Cemetery of the Liberators of Belgrade and at the Red Army Monument.