"No recognition of Kosovo within existing borders"

Serbian President Aleksandar Vucic ruled out, in an interview with the Vienna daily "Standard", that Belgrade should recognize Kosovo within its present borders 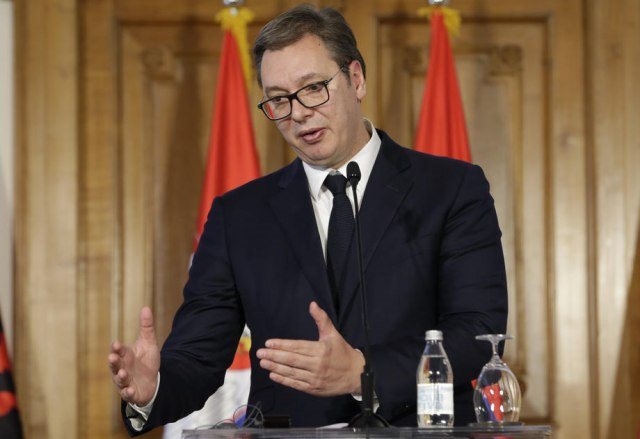 He added that it was unlikely that Belgrade would recognize Kosovo at all, although he said he had heard from the US that the EU had changed its stance and could ask Belgrade for recognition.

Asked if Serbia would ever recognize Kosovo as an equal member of the international community, Vucic replied that it was a difficult question for the Serbs.

"However, we want to see what they (Pristina negotiators) say and why they say something. Of course we want to hear what the EU has to say. So far, the EU has not set any preconditions for Serbia", Vucic said.

"However, we have heard from Americans that this may have changed, but we want to hear it from our European partners. I cannot rule out that the EU will seek recognition, but so far it has not done so”, he explained.

Vucic said that the idea of the EU was a model of an agreement between the two German states, without formal recognition by Belgrade, which, of course, as he noted, would be easier for Serbia.

Asked if the recognition of Kosovo by Belgrade could be within the existing borders, Vucic said: "I can tell you, that I almost absolutely exclude it".

Asked if this meant that it could only be done by changing borders or exchanging territories, he replied that he did not know what was going to happen.

It is not very likely that we will recognize Kosovo. I do not think that will happen, but we cannot close the door to dialogue. Both sides have to lose in order for the win-win situation to arise.

It cannot be that one side gets everything - recognition, our territory and our people.

"What would Serbia get? Possible EU membership in ten years? And who would guarantee us that? Would that be the guarantee that was given to Northern Macedonia, which had been promised to open accession negotiations", Vucic asked.

He emphasized that there is only one condition for continuing the dialogue.

While being reminded that the winner of the previous parliamentary elections in Kosovo, Albin Kurti, is ready to abolish the fees, but wants Serbia to recognize Kosovo license plates, Vucic replied that the leader of the Vetëvendosje had obviously not read the agreement.

"There is already an agreement on license plates, according to which vehicles with Kosovo numbers must affix a sticker and vice versa. If Kurti wants to make a new deal, then let's see what we can do. They have never been a state and are frustrated, which is why they say such stupid things", he said.

Regarding the change of generations after the election and the possible impact on the dialogue, Vucic said he was afraid of that influence.

"In recent days, their public statements have been three times worse than those of Hashim Thaci and Ramush Haradinaj", he concluded.