Medvedev: We are celebrating the anniversary of the liberation of Belgrade in Moscow

The Ceremonial Academy marking the 75th anniversary of the liberation of Belgrade in World War II held in Center Sava, Vucic: I have the most difficult task 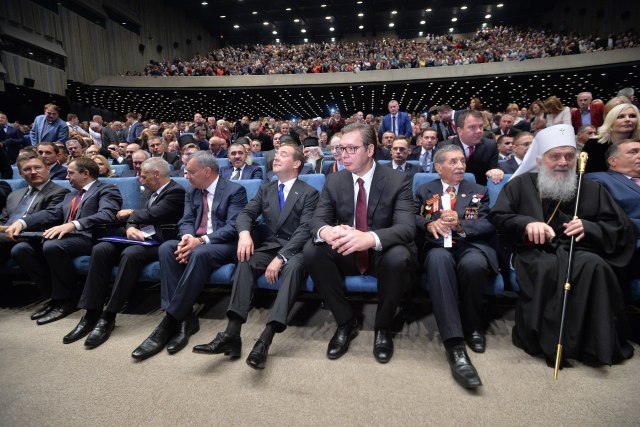 "It's very emotional to be on this stage after all these people who liberated Belgrade and the films about the heroism of the liberators of Belgrade. 75 years have passed, and we know that this victory was won by those who sit here with us or are no longer with us. Therefore, this victory and the memory of it is of utmost importance. The memory of those who forged this victory. I would like to thank all of them and heartily congratulate everyone this anniversary we are celebrating together. Tomorrow, there will be a fireworks show in Moscow to honor the liberation of Belgrade", Russian Prime Minister Dmitry Medvedev stated in Center Sava.

"The best memory of those who gave their lives is to preserve the truth about the event they sacrificed their lives for. There must be no attempt to mask and forget something. All Serbs remember Kragujevac and those troublesome years. It is necessary to speak clearly and openly about it, without political frameworks”, he added.

Serbian President Aleksandar Vucic says "he has the most difficult task".

"I have the hardest task of addressing you after the Russian Prime Minister Medvedev and the song 'Victory Day.' It's been 75 years since Belgrade became a free city. It was not easy, thousands of soldiers gave their lives for that freedom. The Soviet manpower and armaments greatly contributed to the liberation of Belgrade. I would like to thank everyone who helped us liberate Belgrade. We could never have carried out this operation without the help of the Red Army and Soviet friends", Vucic stated. "Freedom is priceless, because its opposite to slavery, massacres, executions and extermination of a nation", Vucic said.

"Serbia proudly stands by its history today and we will never give up on our heroes again. Our history is not bad, so we don't have to regret anything, we are the nation that has always paid freedom with blood. We will protect, care for and defend our people in Kosovo and everywhere else where the rights of our people are endangered", he stressed. He thanked Russia for "every single sacrifice they made for our freedom". The ceremony was also attended by Serbian Parliament Speaker Maja Gojkovic, Serbian Member of the BiH Presidency Milorad Dodik, Serbian Prime Minister Ana Brnabic, Ministers, Patriarch of Serbia Irinej, representatives of the City of Belgrade, Russian Ambassador to Serbia Alexander Botsan-Kharchenko, war veterans...

Former member of the 1st Proletarian Division who participated in the liberation of the Serbian capital in 1944, Zdenko Duplancic, addressed the audience.

The documentary film "The Road to Victory" was screened at the ceremony, and part of the program included occasional music tracks performed by the Russian military ensemble "Aleksandrov", an art ensemble of the Ministry of Defense "Stanislav Binicki" and the choir of the National Theater in Belgrade conducted by Djordje Stankovic.

The battle for the liberation of Belgrade was one of the largest and most significant battles in the Balkans in World War II, which lasted from October 12 to October 20, 1944.

The liberation of Belgrade ended the 1.287-day long German occupation of Yugoslavia's capital.