Serbian President Aleksandar Vucic announces opening of the Serbian Embassy in Yerevan by the end of 2019, along with abolishing visas for Armenian citizens 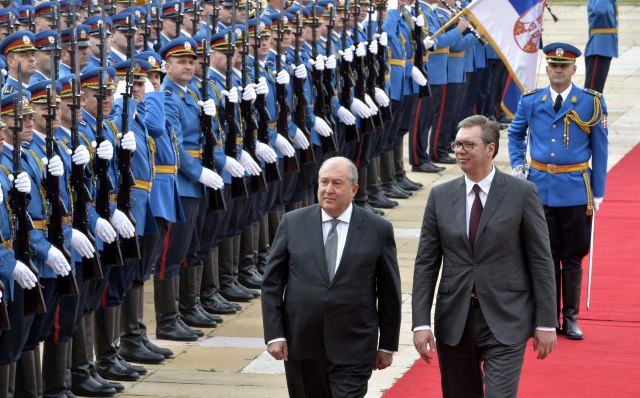 According to the Serbian President, the goal is to further strengthen the friendship between the Armenian and Serbian people. After conducting discussion with Armenian President Armen Sarkissian, Vucic indicated that the realization of at least part of what they talked about would significantly strengthen our friendship.

He stressed that the political relations between the two countries are very good, and that Armenia understands our situation regarding Kosovo, while Serbia strives to have a well-balanced position and always supports a peaceful solution to the problems that exist in the region where Armenia is situated.

He announced that Serbia would show greater openness in relations with Armenia by opening an embassy in Yerevan before the end of the year, and that Serbia would abolish visas for Armenian citizens, hoping for a reciprocal move by Yerevan.

"The ties that unite our peoples are very strong. People may not know that the music for the song 'Vostani Serbie' was composed by an Armenian composer Vartkes Baronijan. I know a lot about Tigran Petrosian, the chess grandmaster, World Chess Champion from 1963 to 1969, but also about other Armenians, such as Charles Aznavour", Vucic noted.

He said that Armenia has a large diaspora, in Russia alone, three million people, that they are hardworking and powerful people and added that they could cooperate on the diaspora related issues and find joint projects.