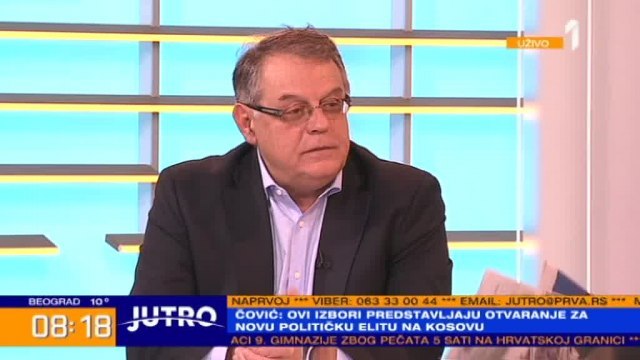 He told Prva TV in the morning program that the BBC's prognosis was realistic and that four parties would enter Kosovo Parliament - Isa Mustafa's Democratic League of Kosovo (LDK), Albin Kurti's Vetëvendosje, Hashim Thaci's Democratic Party of Kosovo, Ramush Haradinaj's Alliance for the Future of Kosovo.

"According to the most recent research, Isa Mustafa has about 29 percent with a small growth tendency. Vetëvendosje is around 24, 25 percent. The others are below. Haradinaj has around 13 to 14%", Covic pointed out, adding that October elections represent the overture for creating a new political elite in Kosovo.

"I think the elections were designed by some international structures as an overture for a new political elite in Kosovo. A new one, in terms of total distance from war and criminal circles."

Asked if it is possible to realize something like that in Kosovo and Metohija, Covic answered in the affirmative.

"Isa Mustafa, as far as I know, did not get his hands dirty. On the other hand, what they think ideologically is yet another issue", Covic points out.