Vucic: Merkel in Serbia; I would have met with Thaci, if I've been invited 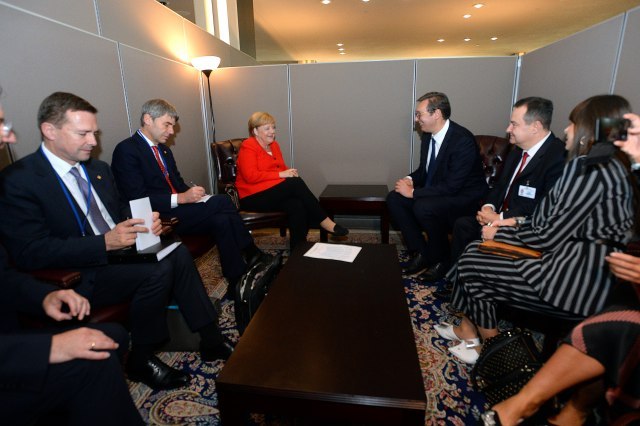 As he said, she will visit Serbia in 2020, prior to expiration of her term of office.

Aleksandar Vucic underlined after the meeting with Chancellor Merkel that they had discussed Kosovo and Metohija, and economy.

The president said that there's no doubt that Europe wants a solution to the Kosovo problem and that Germany would insist on it.

He stressed that it was reiterated on the meeting that talks should resume soon, a regional summit should be held and intensive talks between Serbs and Albanians should be started in order to find a solution.

"There's no doubt that Europe wants a solution to the Kosovo problem and that Germany would insist on it", Vucic added.

"They expect us to talk and talk until we come to a solution," Vucic said.

He said he had invited the German Chancellor to visit Serbia and said she had promised him to do so by the end of her term.

"It would be a great honor for our country to thank her for all that she has done," Vucic emphasized.

Vucic said he met with Macedonian and Albanian prime ministers, Zaev and Rama respectively, and that they are coming to Serbia in the first half of October for a meeting dedicated to the removal of customs barriers.
Asked if he would meet with Hashim Thaci on the sidelines of the UN General Assembly, he said - if he had been invited, he would have met with Thaci.

"However, Thaci, like Vuk Jeremic, walks along the corridors of New York."

He said that parliamentary elections would be held in time and that leaders of the Alliance for Serbia (SzS) could come forward with the proposal for adopting a legal act before the Assembly if they want to delay the election.

Vucic told reporters in New York that he is not planning to delay the election because of SzS leaders Dragan Djilas, Bosko Obradovic, Vuk Jeremic.

"They want to postpone the elections because they cannot win, so they expect that they will be able to delay election for a few months," Vucic said.

He assessed that they are entitled to submit a proposal for the adoption of a legal act, but that he expected those who were "against dictatorship" to be in favor of the election.