Marko Djuric's statement: We are ready to resume dialogue after tariffs' suspension

Director of the Office for Kosovo and Metohija, Marko Djuric, held an extraordinary press conference concerning the sharp statement of the Quint countries 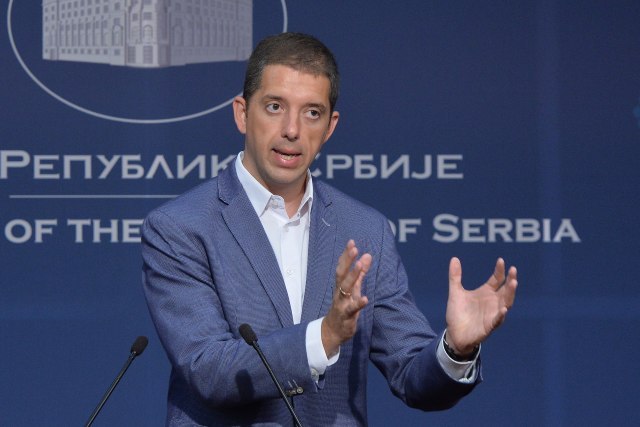 The director of the Office for Kosovo and Metohija, Marko Djuric, says after a joint statement issued by the Quint countries, that Serbia would continue to pursue its internal interests.

Djuric underlined that those who clearly violate CEFTA agreement cannot by any means be compared to those who oppose unlawful membership of the part of its territory in the international institutions.

"We cannot allow artificial attempt to put an equation mark when someone prevents unlawful membership in international institutions and when someone violates CEFTA and other international agreements", Djuric said on an urgently called press conference.

Djuric also finds it disputable for Serbia as the statement clearly indicates what outcome the Quint countries would prefer, what would they try to impose, and what kind of pressure they will exert.

"Dialogue can be resumed but you cannot make even the CEFTA violation by Pristina and Serbia's efforts in preventing Kosovo's independence recognition. Serbia was not the one who initiated membership of Kosovo in Interpol, UNESCO... Pristina's institutions had done that with its aggressive attitude, forcing Serbia to defend itself successfully", Marko Djuric concluded.

"If you ask Serbia to stop lobbying for the preservation of its integrity and sovereignty, without asking the same of Pristina, then it is clear that your desire comes to full recognition of Kosovo, without Serbia's filing any complaints. Serbia had acknowledged your joint statement, and we express our readiness to resume dialogue upon tariffs' suspension. However, I would like to say this loud and clear: Serbia will continue to pursue its internal and foreign policies, guided by its own interests and the interests of its own people, both in Kosovo and Metohija, and in other parts of the country", he concluded.