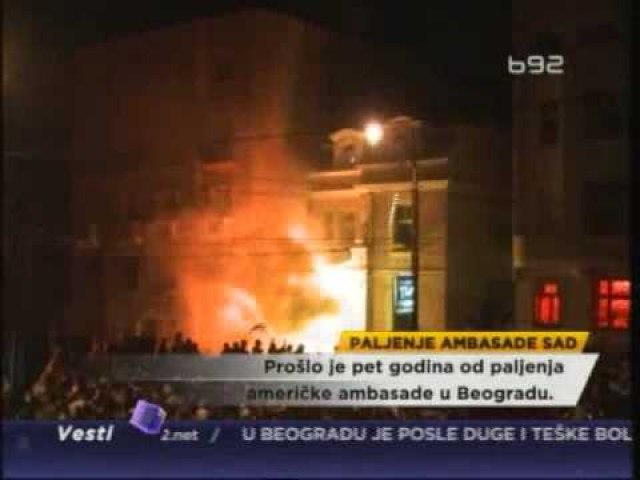 Deputy Chief of Mission at the U.S. Embassy in Belgrade, Jennifer Brush, told Voice of America that Kostunica had been notified of the attack, but had issued a police order not to respond.

"There was no reaction, which was astonishing. Later, I learned from eyewitnesses that the then Prime Minister Vojislav Kostunica attended a service at Saint Sava Temple during the attack, where he received information about the attack on the US Embassy. He responded by saying: 'Don't react'. So, Kostunica ordered the police to do nothing", Brush told Voice of America.

She said it is fine that several police officials at the time are preparing for the trial in Belgrade, but reiterated that "the main responsibility for the attack lies with the then Prime Minister Vojislav Kostunica".

Jennifer Brush states that no one has yet been held responsible for the attack, she claims due to the Serbian government's unwillingness to resolve the case, which has been delayed for 11 years. "It began with the administration of Prime Minister Kostunica, through the administration of the Democratic Party of Boris Tadic, followed by Tomislav Nikolic and Aleksandar Vucic. So, it is a series of political parties that haven’t taken any steps on these international offenses", Brush said.

The former deputy chief of mission stressed that the protection of foreign diplomatic establishments and diplomatic personnel are provided for by the Vienna Convention, to which Serbia was a signatory, adding that the embassy security staff maintained very good relations with the Serbian police and with Serbian special forces.

The former US diplomatic mission building in Kneza Milos Street in Belgrade was set on fire during 'Kosovo is Serbia' protests in February 2008, days after Kosovo declared independence from Serbia.

No one was held responsible for the violence in which one person lost his life, as the suspended sentence abolished four convicted offenders - while three were acquitted due to lack of evidence.

Slobodan Vukolic, Mladen Kuribak, Stevan Bjelic, Zoran Raskovic and Bojan Markovic, former senior police officials are due to appear in court in October - at a preliminary hearing in the case against them for not preventing attacks on the US and German embassies.

A hearing was scheduled in July, to be adjourned again. In an interview for Voice of America, Ambassador Brash reiterated that the United States is committed to Serbia's European integration, but added that there are some outstanding issues in this regard, such as the case of the Bytyqi brothers, who were killed during the NATO bombing, whose murder remained unpunished.