Armored vehicles from Russia exhibited for the first time, Vucic: Thank you, Putin!

10 armored and reconnaissance vehicles of the infantry BRDM 2, obtained from the Russian Federation, were first exposed today in the Mija Stanimirović quarters 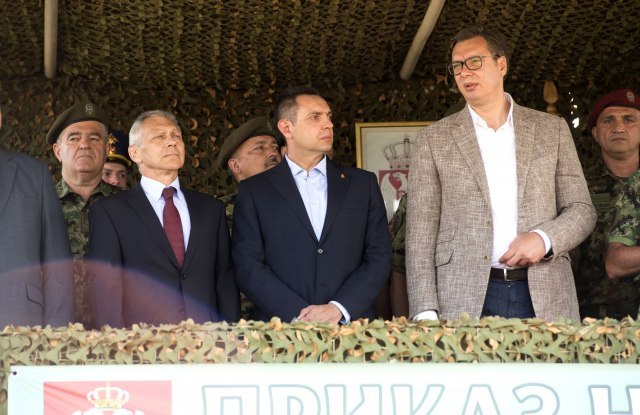 "Now it is modern to speak badly about Putin, but I will be old-fashioned and I will say 'Thank you to President Putin'. We did not pay for this, we got it as a gift, it's important that our citizens know that", Vucic pointed out.

President is accompanied by the Defense Minister Aleksandar Vulin, the Head of the General Staff of the Serbian Armed Forces, General Milan Mojsilovic, and the Ambassador of the Russian Federation to Serbia, H.E. Mr. Alexander Botsan-Kharchenko.

Mojsilovic thanked the president for the support he provided to the Serbian Armed Forces and its equipment, and introduced him to the characteristics of the vehicles.

In addition to 10 BRDM2 vehicles from Russia, an old BRDM vehicle of the Serbian Army was added to the parade.

During the presentation, tanks were presented, as well as the possession of the "Norama" position, self-propelled howitzers.

In accordance with the Military-Technical Agreement, signed between Serbian President Alexander Vucic and Russian President Vladimir Putin, 10 armored vehicles BRDM 2 reached Serbia within the agreed deadline and without any transportation obstacles.

Vucic announced that by the end of the year, Serbia will receive additional weapons either bought by Serbia or donated by Russia.

Vucic said that the vehicles in question are significantly improved and repaired vehicles which Serbia got free of charge, which largely contributed to boosting the operational capabilities of the Serbian Armed Forces.

„Many thanks to Putin and Shoygu for their huge support to the land forces of the Serbian Army. This presents a major incentive to our reconnaissance units, strengthening our combat readiness“, he concluded.

He added that four combat Mi-35 helicopters, three Mi-17 helicopters, and additional BRDM-2MS and T-72 tanks will arrive to Serbia by the end of the year.

Russian Ambassador to Serbia Alexander Botsan-Kharchenko said that his country is determined to continue military cooperation with Serbia, in order to enable Serbia to preserve its sovereignty and territorial integrity.