Vucic: Imagine what a father must have felt upon receiving such threats

Reacting on the threats he and his children received via social networks, Serbia's President said that the persons who threatened him are not yet apprehended 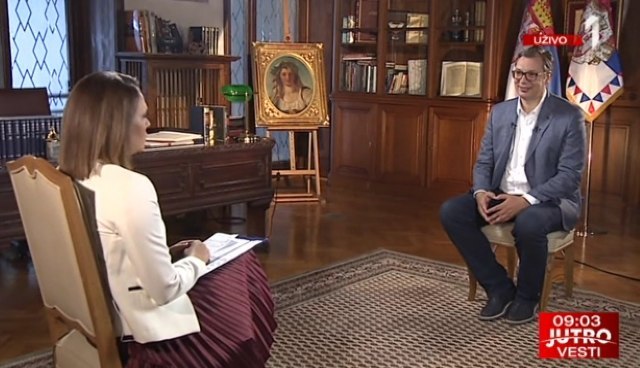 Aleksandar Vucic considered that what he had been doing for the sake of the citizens of Serbia is most important.

"For me, a trip to Smederevo meant a lot. I've spent so many hours on various meetings addressing Smederevo issue. This hadn't come over night. This was a great fight, and I was sceptic about its outcome. I was not certain that we would be able to save Smederevo Steel Plant. After winning this battle, I was so excited and I called it what it really was: an obvious success. Someone reacted to it by wishing my son's death, threatening to rape my daughter Milica, calling her names", Serbia's President said.

It is my job to take care of the citizens' problems, and you'll have to put up with it. "This is not some psychopath, there are two of them who leave such comments alternately, and they are being closely monitored by the representatives of Djilas party", Vucic added.

"I was wondering how is it possible that someone shows so much hatred for a person who did good for our country. I haven't criticized any of them. But they cannot put up with the good news", Vucic concluded.

When asked whether those who threatened him were apprehended, Vucic responded:

"No, they weren't, I believe that competent bodies wait to end investigation, then a confirmation from Twitter is needed, and I am not sure that they are in the country currently."

He added that this is not of vital importance, the crucial thing is to imagine how any father would have felt if someone would say something like that about his daughter.

"Just imagine a father hearing something like that about his daughter". When asked how he will explain those words to his daughter Milica and son Danilo, Serbia's President said: "What is there to explain? She is strong, a very strong young person, she needs no explanation. It is either that, or she manages to hide her emotions so skillfully, I can never tell".