Former KLA Commander and Kosovo's Prime Minister Ramush Haradinaj is in the Hague for the second time, while the crime he is suspected of remains unrevealed 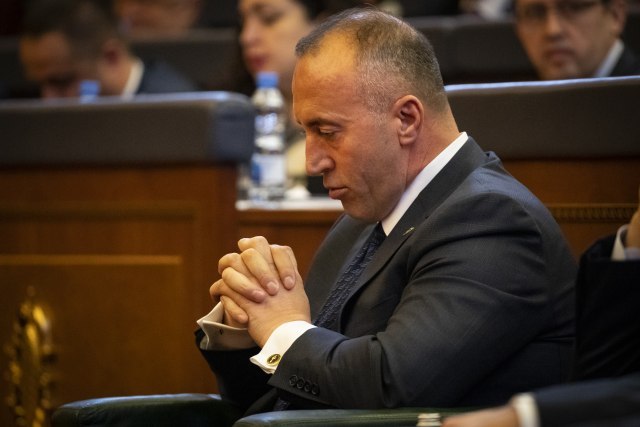 International sources speculate that his responsibility for organ trafficking in the case of ''yellow house'' is now at stake, Blic reports.

The first serious approach to this crime was led by UNMIK which made a report in 2003, the evidence of which were, allegedly, destroyed in the Tribunal for War Crimes for the former Yugoslavia.

UNMIK investigators entered Albania in disguise, gathering evidence and testimonies of the former KLA fighters. According to those testimonies, almost all the people kidnapped by Haradinaj's commanders were sent to the camps in Albania.

Except Haradinaj, the spokesperson of KLA, Jakup Krasniqi, who was the head of Kosovo Assembly briefly, has been mentioned in those testimonies. He was also summoned to the Hague, for questioning.

According to the evidence, main points of contact for transferring the victims from Kosovo to Albania were: Daut Haradinaj, Sami Lushtaku and Jakup Krasniqi, "Blic" writes. UNMIK speaks about the involvement of Naim Maloku, who was summoned to the Hague on June 10, being one of Haradinaj's advisors.

U.S. investigators had largely contributed to this investigation of human organs trafficking, particularly an American with the initials D.L., whom "Blic" contacted.

However, this American was "processed" by Albanian secret service that issued instructions to the local prosecutors not to cooperate in full capacity with him and to obstruct investigation in any way possible.

"Americans revealed four locations with a possible mass graves in Albania. With this past data, and the testimonies of the Albanians, there is also the investigation done on the part of Dick Marty", the source of "Blic" from "EULEX" claims.

Visho Ajazi Lika, former head of Albanian Secret Service, added that he was pressured not to cooperate with the international services in relation with the case of "yellow house" and mass graves in Albania, so he resigned from that position.

""The organ trafficking and the previous kidnapping and transportation of Serbs and Albanians to Albania was not possible without Haradinaj and his superiors. The brother of the former prime minister is also involved. A group of soldiers and officers of the Albanian army were also acquainted with transportation, detaining, torture and burial, because as a military formation they participated in the fighting at the border line in 1998 and 1999, says the source of "Blic".

Haradinaj differed from the other commanders in terms of the number, that is, the territorial extent of the zone he used to hold. When looking at the area that Haradinaj managed, the fact is that he was the one holding the territory towards Albania.