Dinner in Macron's honor: Who attended it, what was on the menu and topics to discuss 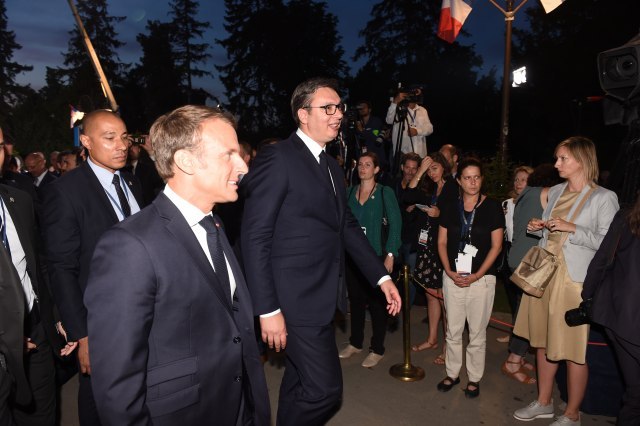 Besides Vucic and Macron, Blic reports that the dinner was attended by numerous Macron's associates, as well as some of the ministers in the Serbian Government.

Prime Minister of Serbia Ana Brnabic, Serbian Chief of Foreign Affairs Ivica Dacic, ministers in the Serbian Government Sinisa Mali and Jadranka Joksimovic, Director of the Office for Kosovo and Metohija Marko Djuric, and numerous advisers of President Vucic were present on dinner with the President of France Emmanuel Macron.

Menu was rich, containing cheese pies, grilled meat prepared in various ways, as well as Serbian wines, while the central theme of discussion was geopolitics, and other issues.

Yesterday, Macron and Vucic had laid wreaths at the Monument of Belgrade's Defenders and the grave of Milunka Savic, a Serbian highly decorated war heroine who fought in the Balkan Wars and in World War I (holder of Order of chivalry of St Michael and St George).

After that, they headed to the Monument of Gratitude to France at the Belgrade's central Kalemegdan Park, where the French President greeted gathered people in Serbian, saying that France would never forget what Serbia did for it during the First World War.

“Thank you for coming here in this great number, for what we are, you have to believe us, deeply grateful. You show that the inscription on this monument ‘Love France as it loved us’ is still alive a hundred years later,” Macron addressed a gathered mass.

He added that it was his turn to say “Serbia is in our hearts.”

After the speeches held on Kalemegdan, presidents headed towards Knez Mihailova Street.