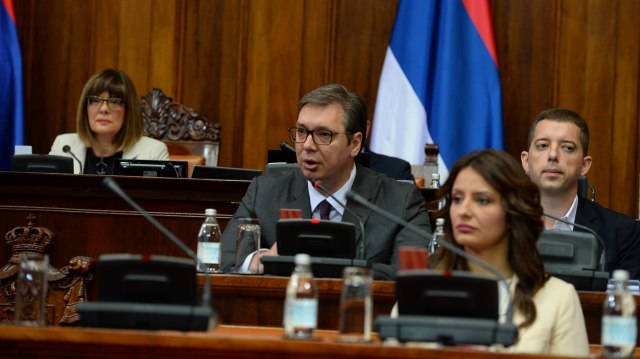 President of the Republic of Serbia Aleksandar Vucic said today that in the operation of a special unit of the National Liberation Army, former ROSU and FIT, 23 persons of Serb and Bosniak ethnicity have been arrested in the north of Kosovo-Metohija, mostly members of the Kosovo police.

Speaking in the Serbian parliament after the session of the National Security Council, Vucic said that this was an attempt to completely criminalise the Serbian people, who is more anxious than ever.

He recalled that Belgrade had information that this would happen, and on 17 May informed the local and international public and representatives of the EU that the Albanians were preparing the arrest of dozens of people in the north of Kosovo under the pretext of fighting organised crime and corruption, which will cause great anxiety and fear among the Serbs.

If there is any serious threat to the order and lives of Serbs in Kosovo-Metohija, the Serbian Army will protect the people, the President said, and confirmed that military and police units are fully on the alert.