Serbian President Aleksandar Vucic says he was surprised by a statement issued by "Quint" countries after local elections in northern Kosovo and Metohija. 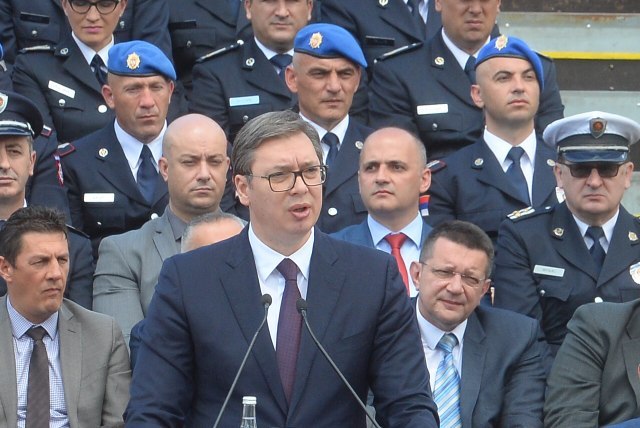 Speaking in Novi Sad on Tuesday, Vucic was referring to the reaction of the US, Germany, Italy, the UK, and France to the voting that took place in four Serb municipalities on Sunday, with the Serb List emerging as the winner.

Vucic said that "the only thing to be concluded from the (Quint) statement is that some people are dissatisfied that the elections were peaceful and orderly."

"I want to congratulate them on their inventiveness. I have never read something so stupid in my life," Vucic said, when journalists asked him to comment on the statement.

The president added that all these countries had their observers in the elections, in order to find some irregularities and mistakes to accuse the Serbs of - but as this failed, they had to refer to pressure that took place in 2017.

"What sense does that make," Vucic asked, adding that this showed "how sorry some people are that the elections took place in peace and order."

He then congratulated citizens in North Kosovo for demonstrating, in a peaceful and dignified manner, how to protect the interest of their people and fatherland, and that "one can behave wisely without poking anyone in the eye, and be winning at the same time."

Commenting on media reports that "only those who had some interest voted in the North" - Vucic said that a huge number of citizens went to the polls, producing a much higher turnout than in 2017.

"So, 25,000 people had a personal interest?," Vucic asked, adding that Albanians are saying that there are 58,000 voters in the North - when there aren't even that many inhabitants there.

Vucic also said that the opposition has no other way to explain its failure, and the fact the Serb List received 22 percent more votes than in previous elections.

The Quint statement, issued after Sunday's elections, reads as follows:

"We note that the election day itself appears to have taken place in an atmosphere of calm.

Still, the embassies recall the findings of the EU Election Observation Mission (EOM) in 2017, which expressed serious concerns about intimidation in many Kosovo-Serb areas, especially against political parties competing against Srpska (Serb) List. These flaws, as well as requirements to update voter registries and clarify procedures, remain unaddressed and result in restricted electoral competition and limited political participation, thus raising questions about the overall democratic process in those areas.

We call upon all relevant actors, including institutions and political parties across the spectrum, to address urgently these shortcomings by implementing the recommendations of the EOM. We encourage citizens and civil society to hold parties accountable for their commitment by joint declaration in the Kosovo Assembly in April 2019, to strengthen the electoral process. Those elected must now commit to representing the interests of all communities within their municipalities."