Serbia and China have "extraordinary relations in all areas" 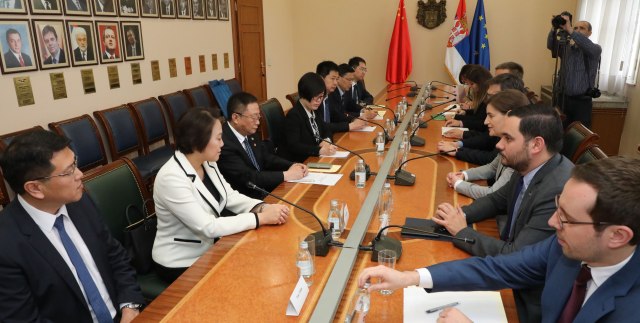 According to the Serbian government, they discussed "overall relations of the two countries and further forms of enhancing cooperation."

Brnabic assessed that relations between the People's Republic of China and Serbia are remarkable and characterised by a comprehensive strategic partnership and "steel friendship".

She stressed that Serbia very much appreciates the support provided by China on the political, economic and economic level, and especially expressed gratitude on the consistent position and continuous support on the issue of Kosovo and Metohija.

Sun pointed out that China and Serbia are friendly countries characterized by excellent cooperation, stressing that this is the reason why he signed the Memorandum of Understanding with the Serbian Ministry of Labour, Veteran and Social Affairs first.

Sun said that this is another step towards improving the relations between the two countries, and at the same time expressed gratitude to Serbia for the humanitarian aid sent to China after a major earthquake in 2008.