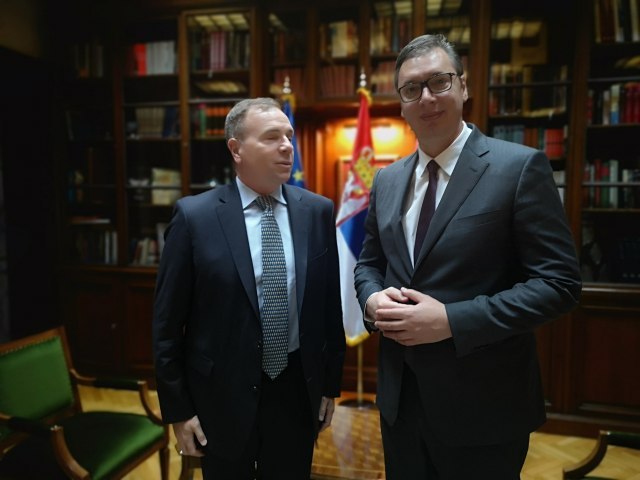 Vucic and Hodges, who is now with the Center for European Policy Analysis NGO, discussed the security situation in South Eastern Europe and the region, as well as problems in the dialogue with Pristina, the president's press office said in a statement.

According to this, Vucic emphasized during the conversation that Serbia will maintain its military neutrality.

Vucic also pointed out that Serbia is a reliable partner in NATO's Partnership for Peace program, especially through the Individual Partnership Action Plan, which includes enhanced political dialogue, readiness to contributing to maintaining peace and stability in the region, as well as to responding to common security challenges.

Vucic explained to Hodges the reasons for the stalling of the dialogue between Belgrade and Pristina, as well as the intention of Serbia to continue the dialogue after Pristina withdraws its illegal and "anti-civilizational" taxes (on goods from central Serbia).

According to the statement, Hodges stressed that long-term stability requires "reconciliation and good neighborly relations" and voiced full support for efforts to resolve the crisis peacefully, "respecting the norms of international public law, as well as the regional agreements reached so far."

"NATO is not only a military alliance, it is an alliance of nations that share and defend common democratic values," Hodges emphasized as a major supporter of transatlantic cooperation.

Hodzis, who is on a two-day visit to Belgrade, where he is taking part in the "Serbia and NATO - A Look at the Future" conference organized by the CEAS NGO, yesterday laid flowers at a memorial dedicated to the children NATO killed during its 1999 aggression against Serbia.