Vucic: They're saying impossible things, others are silent

Albanians have managed to normalize, through everyday repetition, the notion of "national unification" and nobody's reacting anymore, says Aleksandar Vucic. 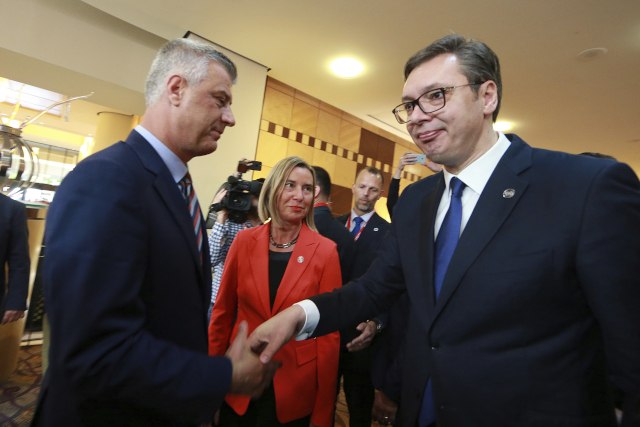 Thaci, Mogherini, and Vucic are seen in Tirana on Thursday morning (Tanjug/AP)

"They are saying impossible things and have accustomed the whole Europe to that," the Serbian president said in Tirana after his meeting with EU foreign policy chief Federica Mogherini late on Wednesday.

Vucic is in town for the regional Brdo-Brijuni meeting, to be held on Thursday.

Vucic said he expressed his dissatisfaction to Mogherini over "the strange developments between Tirana and Pristina, like the story of national unification by Albanian Prime Minister Edi Rama and Kosovo President Hashim Thaci."

"There is no immediate danger to us from this, they are doing it because of internal reasons, but they are also creating a new normality out of this, that this is nothing terrible - but it's terrible that I said that we will not recognize Kosovo and Metohija", said Vucic, and recalled that this was and remains our policy, and that he had said it numerous times before.

He added that if he were to speak about Serb national unification, "15 EU services and at least 15 foreign ministers would react."

He then said that nothing would come out of that - and reiterated that with such rhetoric, Albanians are "establishing a new normality."

Nobody has reacted to this, he said, nor was it referred to in the conversation with Mogherini.

"Federica's not in favor of that, but nobody said anything," Vucic said.

"They are saying impossible things and have accustomed the whole Europe" - and Serbia will, he says, "have it in mind, but the most important thing is that it behaves responsibly and in a balanced way, because in that way it can count on greater understanding."

Vucic said he would tell Albanian President Ilir Meta, and Thaci himself - whom he will see during the Brdo-Brijuni gathering - what he thinks about the discussion between Rama and Thaci - but doubts that he will be able to explain to them how bad, dangerous and devastating it is for the region.

"It seems, however, that Albanians do not want to hear even those who are much more important and more acceptable to them than me," he observed.