"Serbia is small, not stupid. Albanians spit in EU's face"

Serbian Foreign Minister Ivica Dacic has told the country's public broadcaster RTS that Serbia is "a small, but not a stupid country." 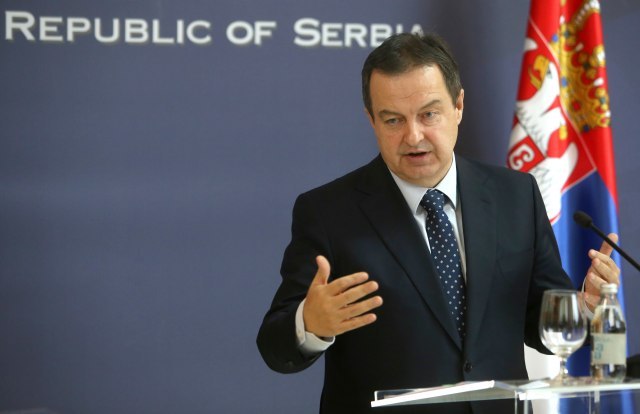 He added that while Belgrade talks about compromise and dialogue, Pristina and Tirana are looking for ways to create Greater Albania - an expansionist nationalist project at the expense of Albanians' neighbors - and do it under the table.

"It's no longer Serbia that's talking about this (Greater Albania) - it's Thaci and Rama, this means spitting in the face of the entire EU, of everyone who is persuading Serbia that we have to be constructive and calm. We're sitting at the table, while under the table, they're arranging for the creation of Greater Albania," said the head of Serbian diplomacy.

The meeting between Rama and Thaci, he said, represents the pinnacle of insolence of Albanian politicians, because during a summit (Brdo-Brijuni, held in Tirana) where regional cooperation is spoken about - they talk about correcting so-called "historical injustices."

Dacic added that "we are small, but we not stupid."

According to him, the question now arises whether Serbia should be taking part in gatherings such as the current one in Tirana, "because behind our back, the idea of ​​Greater Albania is being pushed forward."

"It seems the principle of the inviolability of borders is abandoned when somebody needs to attack Serbia and strike at it," Dacic noted, asking what it would be like if Vucic and Milorad Dodik met to talk about unification of Serbs.

The head of Serbian diplomacy pointed out it's not about opening Pandora's box now, because it was opened already by those recognizing Kosovo itself and violating the principle of the inviolability of borders.

"This is a promotion of Greater Albania that nobody is reacting to. Where are those who criticized Serbia for some idea of ​​delimitation? They said there would be no change of borders - where were they yesterday?" Dacic asked.

Serbia now has no secret plans - only this public one: not to recognize the unilateral declaration of Kosovo (independence), he said.

"This is our public plan and there is no way they could exert pressure, there is not a single Serb who will sign that. In conditions of general madness, sane people look crazy," the foreign minister said.

Dacic also took the opportunity to congratulate the citizens on May 9, Victory Day - celebrating victory over fascism in WW2 - and Europe Day.