President Aleksandar Vucic met on Wednesday with ambassadors of the so-called "Quint" - US, Britain, France, Italy, and Germany, and of the EU Delegation. 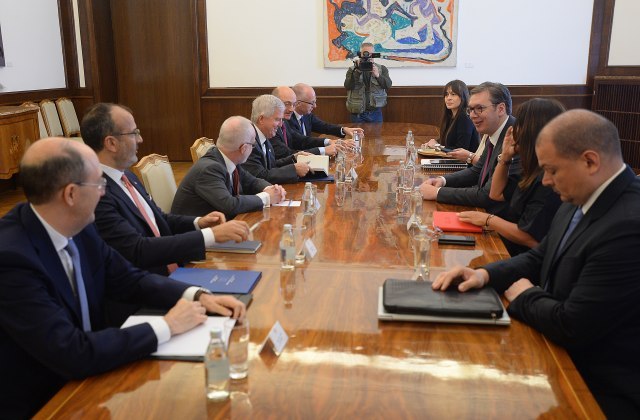 Vucic told them that Serbia is in a difficult position through no fault of its own, and that he "does not understand neither the introduction of taxes, nor the adoption by Pristina of new resolutions against Serbia and the Serb people."

In a conversation that was open, constructive and comprehensive, Vucic spoke with the ambassadors about a meeting in Berlin last week dedicated to the Western Balkans, his meeting with EU foreign policy chief Federica Mogherini, as well as the stalled the dialogue with Pristina, the president's press service said.

The ambassadors called on Vucic to exercise restraint and continue with serious and responsible resolution of problems in the region towards full stabilization of the political situation.

Vucic said Serbia would act rationally and seriously and resume the EU-facilitated dialogue with the Kosovo-Metohija Albanians as soon as Pristina revoked the taxes.

The conversation also touched on the rule of law and the media strategy, the press release said